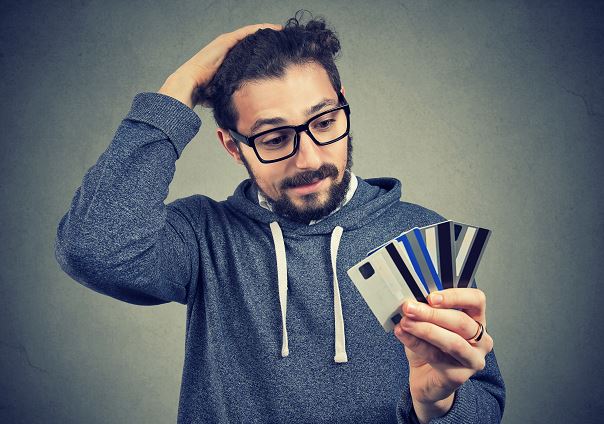 My debt story begins in 2001. A newly minted college graduate, I was excited to start the next chapter of my life. In fact, I had most things planned out even before I graduated.

My plan was simple, or so I thought: Graduate, find a good job that pays six-figures, upgrade my living situation, find a girl, get married, and live happily ever after.

I quickly discovered finding a good-paying job was harder than I ever imagined.

Digging Out From Under Debt (My $10k Debt Story)

I spent my entire summer sending out resumes, but I never heard back from any of those openings. Then the economy went into recession. Not only was it harder to find a job, but it was also almost impossible to find a job in finance.

I quickly became depressed, though I couldn’t admit it to myself.

As the days went by without a job, I found myself walking around the mall to pass the time. Soon I began walking into stores and began buying things with my credit card.

Up until this point, I was disciplined with my credit. I opened my only credit card during my freshman year of college and used it once or twice a month, paying the balance in full every time.
But now I was spending more frequently and I didn’t have an income to pay for the things I was buying. I started to carry a balance. At first, this didn’t worry me. But as the months passed and my balance grew, I knew something had to be done.

Being the smart college finance grad that I was, I knew that if I could get a better interest rate, I could save money. So I found a credit card that offered a zero percent balance transfer offer and applied. I was approved and made the transfer.

I was excited that I was saving money. But my bad behaviors continued. Still, without a job, I continued to frequent the mall most days and charged new items on my credit card. Because I didn’t have a balance on my credit card, I wasn’t worried.

After a few months, I was in worse shape financially. I now had two credit cards with balances. This is when I knew I had a spending problem. I vowed to get my spending in check and pay off my debt.

To save money on interest charges, I again looked for and found a zero percent credit card offer. I applied and again was approved. I’m sure by now you know how the story goes.

After I transferred the balance to a zero-interest credit card, I ended up charging more on my original credit card again!

A few weeks later I again found myself at the mall. I was looking for a jacket to buy. For some reason, the light bulb went off. I questioned what I was doing. I had a couple of jackets at home and I didn’t wear most of them. Why was I buying another one?

I put the jacket back on the rack and went home. On the drive home I did a lot of thinking and came to the realization that I was depressed because I couldn’t find a job.

I knew I had to do something drastic. So the next day, I searched for a therapist and began to get professional help to aid me with overcoming my depression.

Digging Out Of My Debt Hole

When I was in therapy to treat my depression, I found a part-time job. I figured having any job is better than no job. With the income I was earning, I was able to make the minimum payments on my credit card debt.

At this time, the total on the three cards stood at $10,000. I didn’t think I was ever going to get out of debt. But after a few months of working part-time, I found a full-time job.

I decided to work two jobs while I paid off my debt. The income from my part-time job went towards paying off my debt. I didn’t budget any of it for living expenses, 100 percent was for my debt.

Lessons Learned During My Journey

Over the course of my journey, I learned a lot about myself and money. Here is a summary of these lessons.

Getting out of debt takes time.

When I began to really pay down my debt, I wanted out as fast as possible. As a result, I was putting everything I could towards my debt. This meant I wasn’t going out with friends or having any fun.

At first, this worked. I was motivated to get out of debt. But then I began to resent my debt. I realized I didn’t get into debt overnight and I wasn’t getting out that fast either. So I dialed things back and allowed myself to have some fun while paying off debt.

Finding this happy medium helped me stick long-term to my plan of getting out of debt.

You don’t have a spending problem.

I thought my issue was that I just liked spending money. But buying things was a symptom of a deeper issue. And as much as I tried to break the debt cycle, I found myself right back in debt time and time again.

This was because I wasn’t treating the root issue. When I finally admitted I was depressed and got help, I was able to break the cycle for good.

If you are struggling with debt, I encourage you to take some time and look within. What issues are going on in your life that might be causing you to spend money you don’t have? Do you have a job you dislike? An unhappy relationship? Something else?

It isn’t easy and it isn’t fun to admit we have issues, but if you want to be debt-free, you have to do this. For as much as I cried when I admitted I was depressed and for all the crying I did in therapy, it was worth every minute.

The joy I get knowing I am not in debt or worried about the next credit card bill in the mail is priceless.

The “highs” are dangerous.

I started out not buying much. But when I did, it made me feel good. I got an endorphin rush from it. Looking back, I think buying things allowed me to pretend I was employed making good money.

But the “high” I got from buying things quickly wore off. This caused me to buy more things faster and faster. So even though my spending started off slowly, I quickly grew my credit card debt because I was buying more and more to make me feel better about myself.

Having credit card debt is not fun and it can be frustrating and depressing to try over and over to break the cycle only to fail again and again.

If this sounds like you, I encourage you to take a little time. Go for a walk in the park or into a room by yourself and think. Dig into why you are buying things and what in your life might be making you unhappy.

As I said before, it won’t be fun and it will hurt emotionally. But it is what has to be done. You will get through it and grow as a person. And as a result of this growth, you can finally tackle your debt and make progress to becoming debt-free.

If you are willing to take the first step, you can overcome your debt. And trust me when I say that it is well worth the effort.