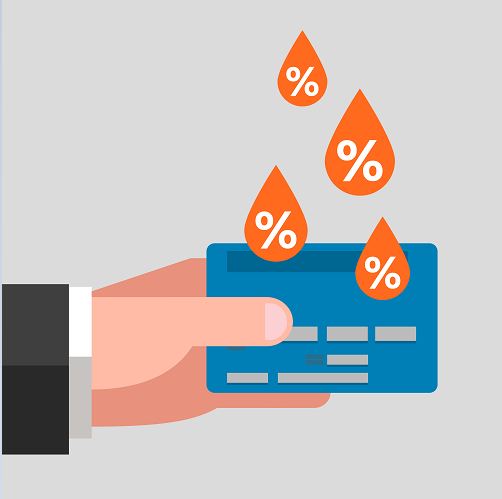 One reason many people fall deep into credit card debt is not just because they’ve charged more on the card than they can afford to pay off. Sometimes we fall deeper into debt because of the interest that accrues on our outstanding debt.

Most of us have experience with interest but know very little about it. That changes today! Below we’ll cover how interest rates work, how the interest rate is determined, how your credit score affects your interest rate and more.

How Your Credit Score Affects Your Interest Rate

What is an interest rate?

Before we dive deep into how interest rates work and are determined, let’s talk about what interest is.

Most commonly, interest is known as the cost you incur when you borrow money from someone else. To compensate the lender for the risk of lending you money, as well as their inability to use the money while it’s lent to you, an interest rate is applied.

Interest is also something you can EARN if you lend money. That’s why when you are paying interest it’s referred to as the ‘rate of debt.’ However, if you’re earning interest through your savings account or by lending money, the interest paid to you is known as the ‘rate of return.’

There are different ways to pay interest depending on the type of loan you obtain. The most common include:

The key here is that the amount of interest you pay varies based on what you owe.

The amount of interest you pay will vary based on the interest rate you are given. One of the most common types of interest is called variable interest. What this means is that your interest rate can fluctuate. Variable interest is commonly identified by credit card companies as an annual percentage rate or APR. The APR tells you how much you’ll pay per year should you not pay off the balance in full at the end of each month by the due date. But your APR can change from year to year.

For example, if you’re looking at a credit card that has a 24 percent APR interest rate, this means that if you don’t pay off your account by the end of the month, any balance you carry will be charged 2 percent interest each month for that year. But the APR could increase or decrease the following year.

Fixed-rate interest credit cards do exist, but just like unicorns, they’re hard to come by. That’s because, in 2009, cards that didn’t actually offer a fixed-rate were labeled as being fixed-rate credit cards. Congress passed the Credit Card Accountability, Responsibility and Disclosure Act, or CARD Act, to fix that error.

If you’re looking for fixed-rate cards, note that credit unions are more likely than banks to offer them.

While fixed-rate interest cards sound superior, some financial experts argue it shouldn’t matter what the interest rate is on a credit card because you should be paying off your card each month.

However, these same financial experts agree that if you have an expense you can’t quite pay off yet, say like a wedding or your car needs new brakes, a fixed-rate card is superior to a variable interest card (APR).

How are interest rates determined?

Interest rates are dependent on a few factors. One of the biggest factors is how mathematically risky it is for the lender to lend money to a specific borrower. AKA the odds the lender’s money is paid back to them in full and on time.

For more information on how your credit score is determined, check out this blog.

The type of loan you receive will also affect your interest rate. Revolving loans, specifically credit cards, generally have a higher interest rate because these types of loans are more expensive to manage and there is a higher risk the money will not be paid back to the lender; at least not immediately.

Interest rates are also dependent on actions by the Federal Reserve.

The Role of the Federal Reserve

The Federal Reserve, commonly referred to as the Fed, is the central bank of the United States and provides the U.S. with a “safe, flexible and stable monetary and financial system.”
In addition to acting as the banker for the U.S. Treasury, since 1977, the Fed has also operated under a “dual mandate” from Congress to foster economic conditions that achieve both stable prices and maximum sustainable employment, as well as moderating long-term interest rates.

As the official lender to the banks in the U.S., the Fed meets eight times each year to discuss whether there is a need to change the Fed’s monetary policy. The reason for this is because the Fed sets a discounted interest rate, which is what the banks pay to borrow money from the Fed. Banks use the discount rate as a baseline for what to charge consumers who come to them to borrow money.

In addition to the Fed fund rate, each bank has a minimum interest margin they charge on top of what the Fed charged the bank to lend money. The sum of the combined interest is used to determine a range of interest rates that will be offered to a bank’s customers. The specific rate offered to you, is based on your credit score.

Back to the Feds

In the financial world, the eight times per year that the Fed meets is a closely-watched event. It’s at these meetings where the Fed will announce if there will be a change in the interest rate.

If the Feds increase the funds rate, it takes between 12 months to 18 months to see the effect of the change throughout the economy. When the funds rate rises, banks begin to lend less, businesses start cutting back on expenses and consumers stop spending as much money. One reason the Feds raise the interest rate is to curb inflation.

If an interest rate hike does occur, the interest on loans and mortgages increases. However, interest earned on money in your savings account also typically increases as consumers are encouraged to save more and spend less.

As of Aug. 15, 2018, the average credit card interest rate reached a record high: 17.03 percent, beating last week’s all-time record of 17 percent. The lowest interest rate available currently is 13.90 percent, while the maximum for those with bad credit is 24.18 percent.

Interest rates are currently at their highest point since CreditCards.com began tracking rates in mid-2007 and are expected to keep climbing during the next year, as the Fed has signaled it will raise interest rates before 2019.

The reason for this is because the average credit card borrower owes around $5,472 to their credit card companies – up from $5,332 in the first quarter of 2017, which is of concern to policymakers, reports the credit bureau TransUnion.

According to the American Bankers Association’s latest Credit Card Market Monitor, 44.8 percent of credit card account holders carry debt from month-to-month, while fewer than 30 percent of cardholders pay off their credit card balances in full each month.

Don’t forget to check out our tips on how to negotiate a lower interest rate on your credit cards!