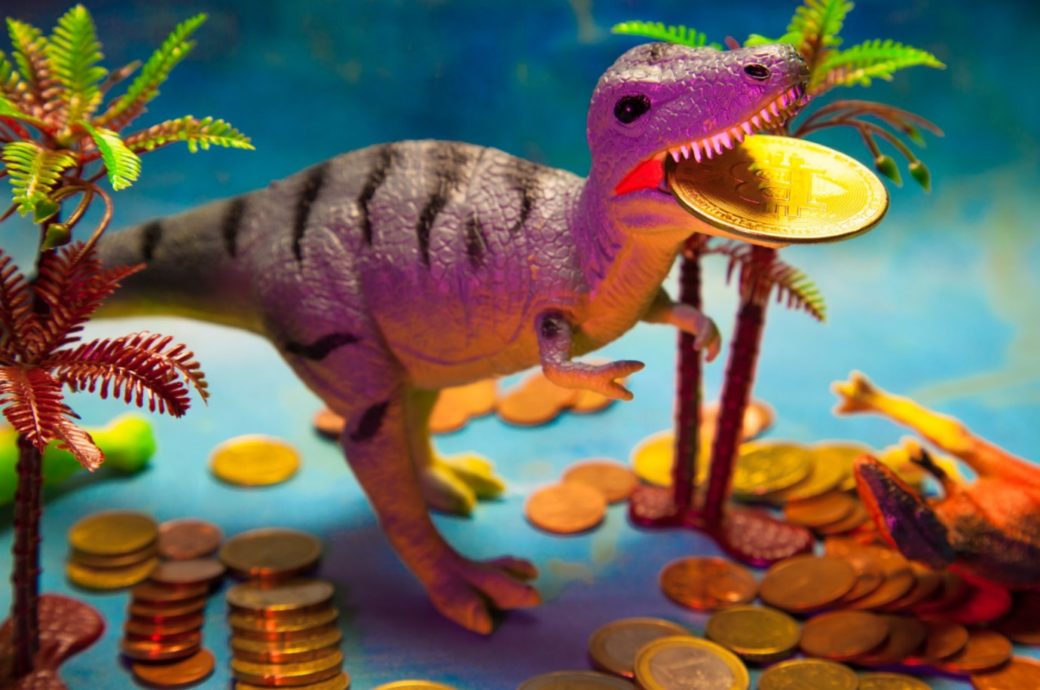 Whether it’s a poorly considered investment or intentionally ignoring your financial situation, the truth is we’re all one-decision away from financial disaster.

In a world that is ravenous for all things newer, better, bigger, no one is immune from the pressures of keeping up with the Joneses Kardashians. But that can come at the cost of losing our financial stability. Never was this clearer to me than when I recently re-watched Steven Spielberg’s 1993 classic film Jurassic Park.

If you’ve never seen or need a quick refresher, here’s a synopsis of the film’s plot:

Paleontologists Alan Grant and Ellie Sattler, along with mathematician Ian Malcolm are selected to tour a dinosaur island theme park populated by dinosaurs created from prehistoric-DNA. While the park’s mastermind, billionaire John Hammond assures everyone that the facility is safe, they find out otherwise when numerous ferocious predators break free and go on the hunt.

Up until this point in my life, I believed the only lesson from Jurassic Park was why one should never try to bring back dinosaurs – even if it is on a private island. But after my recent re-watch, I couldn’t stop thinking about all the hidden lessons about money in the film.

In Jurassic Park, John Hammond is a billionaire who uses his own money to create and populate a dinosaur-themed park, Jurassic Park, on a private island. Hammond wanted to create the first-ever dinosaur island not because he had a deep love and appreciation for the extinct creatures – he wanted more money and believed this theme park was the way to achieve his money goal.

Hammond invites paleontologist Alan Grant to the island, along with graduate assistant Ellie Sattler, and chaos theorist Ian Malcolm because he needs their approval before the park can open. But it’s clear Hammond has rose-colored glasses on when it comes to this park. Every flaw in the park can be excused in some capacity. Even violations as serious as no functional door locks on the guided tour around the island.

By the end, it’s too late. Hammond’s investment is completely gone. As Alan tells Hammond at the end: “Mr. Hammond, after careful consideration I’ve decided not to endorse your park.” To which Hammond responds: “So have I.”

Money Lesson: Not every idea or investment that looks healthy, successful, or safe on the outside is the same way on the inside. Jurassic Park’s operations were incredibly flawed from the get-go, but Hammond was blinded by how rich he would be if the theme park turned out to be a success.

When Alan, Ellie, and Ian first arrive at Jurassic Park, they are escorted via helicopter to the park’s headquarters and main operations. During the flight, the camera pans to show the characters successfully buckling their seatbelts in the helicopter, except one: Alan Grant.

Alan Grant’s seatbelt doesn’t work properly because he has two holders, he doesn’t have a belt buckle to use along with a holder to securely fasten himself inside the helicopter. Thanks to some quick thinking, Alan ties the holders together in a knot, as if he was tying a pair of shoes. While it’s not exactly how the seatbelt was intended to be used, it holds up and Alan remains securely in the helicopter.

Money Lesson: Life is going to throw curveballs at you and you may not feel properly equipped, just like Alan in the helicopter. We’re not always going to have a heads-up that the water heater is going to break, our basement flooded, or our car broke down. The key is to use what you have to the best of your abilities and “hold onto your butts.” The same goes for our savings goals or debt-free goals; it’s great to have a plan, but we also have to find ways to remain flexible to handle any obstacles that come our way.

Part of what leads John Hammond to believe his dinosaur park is safe to visit, so safe that he allows his two grandchildren to join Alan, Ellie, and Ian in their tour of the island, is that he believes all dinosaurs on the island are female. Hammond believed that by having his team of scientists alter the prehistoric Dino-DNA by using frogs’ DNA to fill-in missing genomes that he would be able to prevent the dinosaurs from breeding on their own.

It doesn’t work. The dinosaurs end up breeding on their own. What the scientists working for Hammond failed to consider was that there are species of frogs that change their gender on their own. For example, the West African Bullfrog, a type of frog, changes gender in order to reproduce when it is isolated into a same-sex grouping.

When Ian discovers the dinosaurs are breeding on their own, he tells Hammond: “Your scientists were so preoccupied with whether they could, they didn’t stop to think if they should.” In other words, the scientists’ didn’t consider whether introducing frog genomes in the dinosaurs DNA would allow the dinosaurs to change genders in order to reproduce.

Even as chaos ensues, Hammond tries to defend his oversight by saying nothing worked at Disneyland before it opened either. Ian reiterates that comparison is not appropriate by pointing out that animatronic pirates don’t eat people, dinosaurs do.

Money Lesson: Just because you can “afford” to make a purchase doesn’t mean you should. We all have the ability to max out our credit cards, not pay our bills, rent, mortgage, utilities, etc., but that doesn’t mean that it’s a good idea or one that supports our future goals. Similarly, when we are making plans for the future, it’s silly to not plan for financial emergencies. If it’s an after-thought, it already may be too late. Putting aside $5 or $10 a week for a rainy day can make a big difference down the road.

At Jurassic Park, Hammond oversees a staff of about 20 people. I know, it’s a ridiculously small staff for a prehistoric zoo/theme park.

Newman Dennis Nedry is a computer programmer who is tasked with the responsibility for the entire park’s IT infrastructure system. The thing is, Nedry found himself in financial trouble while working at Jurassic Park.

Check out this conversation Nedry has with his boss, Hammond:

John Hammond: Dennis, our lives are in your hands and you have butter-fingers?

Dennis Nedry: [Laughs] I am so unappreciated in my time. You can run this whole park from this one room with minimal staff for up to three days. Do you really think that kind of automation is easy [takes a drink of soda] or cheap? Do you know anyone who can network eight connection machines or debug two million lines of code for what I bid for this job? Because if you do I’d love to see them try.

John Hammond: I am sorry about your financial problems Dennis I really am but they are your problems.

John Hammond: I will not get drawn into another financial debate with you Dennis, I really will not.

Dennis Nedry: It’s been hardly any debate at all.

John Hammond: I don’t blame people for their mistakes, but I do ask that they pay for them.

In summary, Nedry was feeling undervalued and underappreciated in his role. He believed he was owed more money from his employer and acted entitled as if his employer should pay off his debts. Hammond believed every individual makes mistakes, but that every individual should clean up their own mistakes. His point of view was that Nedry got himself into debt and Nedry should, therefore, be able to get himself out of debt.

Money Lesson: Life is not fair. Mistakes happen to all of us, they are a part of life. We may not have been properly taught how to pay off a credit card, how to file our taxes or save for retirement on a low-income salary, but pouting or complaining, although cathartic, will not help solve our financial concerns. Take responsibility for your past, present, and future money mistakes you’ve made in the past and learn from them. Lean-in to the emotions you feel about money and journal about them.

Let’s go back and talk about Nedry’s financial problems.

Nedry is clearly feeling undervalued and underappreciated at work. In the previous example, you saw how it seems to the audience Nedry has tried to talk about his money worries with Hammond before; but the issue has not been handled in a way that leaves Nedry feeling secure. So he decides to look after his own interests instead of prioritizing park safety.

Nedry is approached by a Jurassic Park competitor who asks Nedry to steal dinosaur embryos in exchange for $1.5 million dollars. This is the reason Nedry turns off the park’s security system; he needs undetected access to the dinosaur embryos and he has to go meet his connection at the docks to collect the remainder of his payment.

The thing is Nedry never makes it. The heavy rain on the island led Nedry to take a wrong turn, get lost in the jungle, hit a tree, oh, and get eaten by a Dilophosaurus.

Not only is Nedry dead, but now the park’s only supercomputer guy is gone and no one else knows how to access or properly work the park’s security system, allowing hundreds of dinosaurs to roam free out of their electric enclosures.

Money Lesson: Try to avoid putting all of your money, or a majority of your money, in any one investment, expense, stock, service, etc. There are many variables in life and we have to consider what may happen if we put all of our marbles into a jar and then the jar breaks or is no longer available. The same goes for money – try to avoid putting your retirement, savings, or investments in one place.

What are your favorite money lessons from Jurassic Park? Share your ideas with me in the comments below!