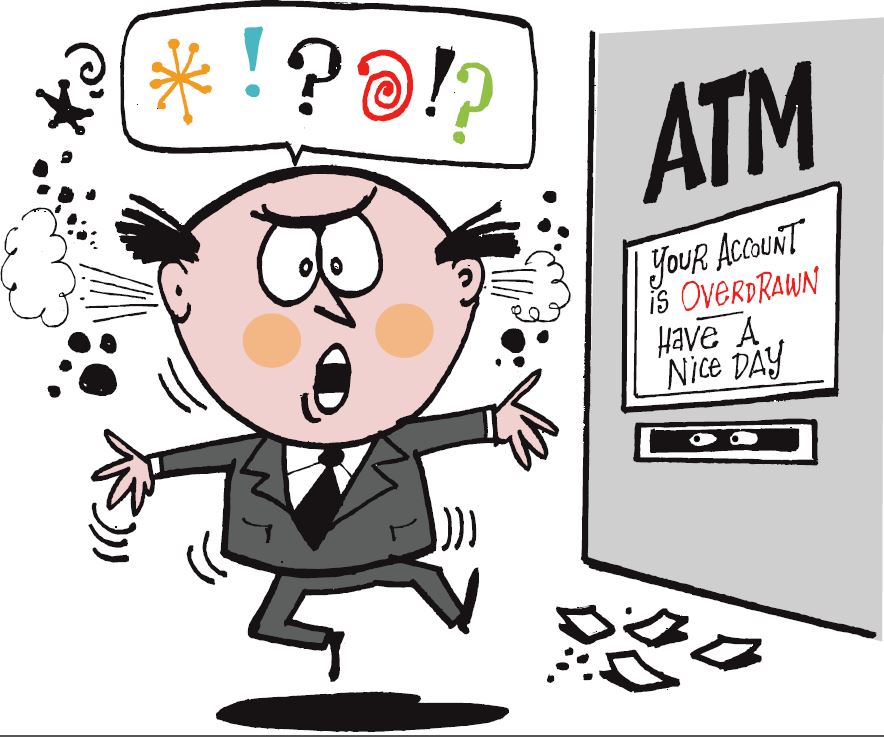 It happens to the best of us.

You’re running out of work to get to the gym so you can quickly get in a run before you pick up the kids from school/sports/church when you realize you forgot your water bottle.

It’s a small bump in the road, but one you are bound and determined to overcome.

After arriving at the gym, you head to the snack shop, where you half-heartedly hand over your debit card.

The next thing you know the $2 bottle of water at the gym has cost you $36.

How is that possible?

Unfortunately, your account did not have sufficient funds and you were charged a $34 overdraft fee.

The recurring $79 monthly gym membership payment happened to hit your bank account that morning, leaving you with less than $2 in your account.

Because you signed up for the bank’s overdraft protection plan when your account went into the negative you were essentially given a very expensive loan to cover the cost of your purchase.

A similar process happens when you write a check for a higher value than what is in your bank account, commonly referred to as bouncing a check or a bad check.

If a bank receives a check from an account with insufficient funds, the bank can refuse payment and charge the account holder non-sufficient funds or NSF fees.

For example, say you have $100 in your checking account, but you initiate an electronic check payment for a purchase in the amount of $120.

If your bank refuses to pay the check, you will incur an NSF fee and face any penalties or charges the seller assesses for the returned check.

If your bank accepts the check and pays the seller, your checking account balance falls to -$20 and incurs an overdraft fee.

Either way, the fee assessed by the bank reduces the available account balance to a negative.

In 2010, federal regulations took effect that allowed customers to choose whether they wanted to opt-in to the overdraft program or not. By opting in, a customer agreed that a bank could charge them fees to process sales or ATM transactions, even if it exceeded the account balance. If a customer had not opted into the overdraft program, the ATM withdrawals and debit card transactions would be declined if there was not enough money in an individual’s account.

The national average NSF fee is about $33.04, according to Bankrate.

The average overdraft fee is around $34.

In 2016, the three largest banks in the U.S. – JPMorgan Chase, Bank of America and Wells Fargo – made $6 billion from overdraft and ATM fees alone.

That equates to the banks collecting $25 from every adult in the U.S.

“We’ve heard from customers that they’d prefer to be assessed a fee [rather] than face the embarrassment of having a purchase declined,” said Bank of American spokeswoman Alexandra Liftman.

Dennis DiFlorio, then-president for retail banking at Commerce Bancorp Inc. in Cherry Hill, N.J., a bank that doesn’t charge customers for overdraft protection disagrees with the intent in offering overdraft protection. “It’s not about customer convenience,” he told Business Week in 2005. “It’s just a way for banks to make money off customers.”

A Move to Regulate

In 2007, filmmaker Karney Hatch debuted his documentary “Overdrawn,” which examined the predatory lending practices of the major national banks, specifically focusing on overdraft fees. Hatch was inspired to make his film after he was charged $140 in overdraft fees for purchases that totaled just $60.

In researching for his documentary, Hatch found “borrowers pay triple- and even quadruple-digit interest rates” when it comes to overdraft fees. He also found that the Federal Reserve Board, which is not part of the U.S. government, noted that “overdraft coverage is credit in every sense of the term.”

In recent years, consumer advocates have pushed for increased regulation, arguing that given most overdraft charges occur on transactions valued $24 or less, overdraft and NSF fees unfairly target low-income persons as well as people of color.

“If a bank lends you $100 and charges you a $20 fee — and then you pay the money back in two weeks — that’s an annualized interest rate of 520 percent,” Jean Ann Fox, director for consumer protection at the Consumer Federation of America in Washington told Business Week in 2005. “It’s worse than a payday loan.”

During the 2016 Democratic primaries, these fees became hot political issues for some candidates.

Both Hillary Clinton and Bernie Sanders discussed putting a cap on certain bank fees, including ATM fees, should they be elected. Both noted ATM fees have risen for the past nine years.

At the time, out-of-network ATM fees averaged $4.52 per transaction.

According to DepositAccounts’ Tumin, when consumers don’t plan for hard times, “the odds of being hit with more bank fees rise considerably.” Tumin recommends only opening free checking accounts, not those that require a minimum balance or a direct deposit.

To ensure you have enough funds in your account to cover each purchase.

To stay aware of the remaining balance in your account.

To prevent unnecessary delays in accessing your money.

It’s best to have anywhere from $20 to $100 in your account at all times to lower the chance you overspend.

Make sure you are notified if your balance falls below a certain number. You can choose to receive an alert once you reach your buffer amount in your account to be on the safe side.

Find a bank or credit union in your area that offers a large ATM network where you can use ATMs without being charged a fee.