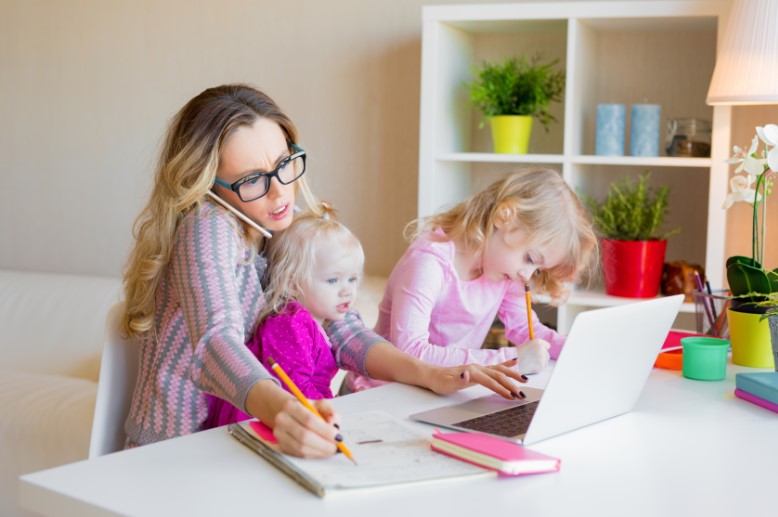 When the global pandemic began in February 2020, there was a lot of fear of the unknown. Not just fears surrounding the coronavirus itself, but financial unknowns, career unknowns, childcare unknowns, education unknowns. Now a little more than a year later, there is more than just optimism on the horizon. Industries once at a standstill like the hospitality, beauty, and travel industries are not just thriving, they are booming, and demand doesn’t appear to be waning anytime soon.

As schools, businesses, and theme parks begin to reopen, life is slowly returning to a more familiar pace. Once again we’re looking for tips on how to save money at the gas pump instead of trying to get our hands on toilet paper. Yet there’s one aspect of the pandemic that has many worried: the large number of women leaving the workforce.

Since the pandemic began last February, more than 11 million women lost their jobs and an additional 2.65 million women have left the workforce, according to an analysis of labor department data from the Institute for Women’s Policy Research (IWPR).

Globally, women’s job losses due to COVID-19 are 1.8 times greater than men’s. In the United States, unemployment intensified the most for those in the personal care and foodservice industries, where women, you guessed it, dominate the workforce.

Women’s departure from the workforce since the pandemic began is so large that it’s been dubbed a “she-cession,” at least that’s the term that C. Nicole Mason, Ph.D. IWPR president & CEO, coined to describe how the pandemic recession is deeply and disproportionately affecting women.

This is not the first time one gender has fared better than another during an economically challenging time.

In the 1970s, the U.S. experienced what was considered a “man-cession” when industries like construction and manufacturing were predominantly affected. There was another man-cession between 2007-2009 when those same industries and the technology sector were affected. As AEI scholar Christina Hoff Summers told The Atlantic, 80 percent of job losses during that two-year period were predominantly among men.

In fact, most recessions affect men more than women. The silver lining is that when men lose more jobs and wages than women, women use that economic shakeup as a chance to lessen the gender pay gap by taking on more responsibility and higher earnings. But in this pandemic recession, women’s wages and jobs are not just getting wiped out, the damage is affecting our ability to close the gender wage gap, amongst other concerns.

“If we don’t close the gender wage gap, a woman starting her career today stands to lose more than $400,000 over a 40-year career,” says Emily Martin, vice president for education & workplace justice at the National Women’s Law Center. “Latinas will typically lose over $1 million and Black women and Native American women close to that.”

Financial Ripple Effect of the She-cession

Part of why Martin, Mason, and others are highly concerned about the financial impact of this she-cession is because many women, predominantly women of color, have been unemployed for 28 weeks or more. The longer a person is out of the workforce, the harder it is for them to get a job, which impacts their long-term economic security, earnings, and overall well-being.

Not only that, but this gap is much larger than what was observed during recent man-cessions.

“In regular recessions, women’s labor supply works as a ‘shock absorber’ in many families – if a husband loses a job, his wife is often able to continue working or even increase her labor supply, which stabilizes family income in a recession,” according to an economic study of the she-cession led by University of California-San Diego Assistant Economics Professor Titan Alon. “This insurance mechanism helps families compensate for income losses and leads to a lower transmission from income to consumption.”

However, in this pandemic recession, “the scope for insurance within the family is much reduced,” Alon’s study notes. “Many women who otherwise would provide this insurance also lost their jobs. Families with children have little flexibility to react to shocks because so much of their time is taken up by childcare needs.”

“Our model simulations suggest that it will take a long time for women to catch up to pre-pandemic levels,” explains the study’s co-author Michèle Tertilt, Professor of Economics, University of Mannheim.  “The reason is a ‘scarring effect’ – when women do not work for a while, they will likely find worse jobs when they re-enter. Similarly, women who reduce hours will likely miss career opportunities.”

According to the most recent Women in the Workplace Report by McKinsey, 1 in 4 women is considering stepping out of the workforce or downshifting their careers, citing company inflexibility, caring responsibilities, and stress.

The authors of the study concluded that if every woman who was considering quitting her job or reducing her hours did so, it would equate to an additional two million women leaving the workforce.

The women most likely to go? Women in senior roles, working mothers, and women of color. And the industries affected? Pretty much every single one.

Many women working in medical fields are hesitant to continue their roles due to fear of COVID-19 exposure, says Dr. Roberta Gebhard, immediate past president of the American Medical Women’s Association, a trade group. Gebhard says she has witnessed female physicians increasingly take on more flexible career opportunities such as wellness or career coaching after being laid off or leaving the workforce.

Even executive women — who have not quit or been laid off — are having a difficult time, adds Jocelyn Kung, a San Francisco-based executive coach to many female executives working in tech. Kung notes many females in leadership positions are increasingly “downshifting” and not pursuing challenging career opportunities to try to get through the demands outside of work, she says.

“At the senior level, the women are more exhausted than the men for sure,” she says.

So not only have millions of women been forced out of the workplace in the last year alone, but more women are expected to leave due to the mounting pressure of caregiving tasks at home, which often leave women feeling sandwiched between taking care of aging, older parents, young children, and managing the household, all while trying to contribute financially.

In that same study, households with two working parents were asked to imagine which parenting partner would be the preferred person to leave the workforce to become their children’s primary caregiver, 69 percent of women said they would likely be the one to leave work, compared to 31 percent of males.

However, there is still one aspect of childcare that even before the pandemic was resulting in large droves of women leaving the workforce: The high cost of child care.

More than half of families (55 percent) reported spending at least $10,000 a year on child care alone, according to Care.com. That’s per child.

Even in two-parent, two-income households, where one parent has considered leaving or has left the workforce to become a primary caregiver due to the pandemic, 50 percent reported the cost of childcare was a significant factor in their decision, according to NextAdvisor data.

Indiana University sociology professor Jessica Colarco, whose research includes the pandemic’s effect on families, puts it bluntly: “In other countries, there are safety nets. In the U.S., we have women.”

And the losses are not temporary, adds Dr. Colarco. “Once women get pushed out, it’s very difficult for them to find their way back in,” she said.

She’s not wrong. Research shows that in heterosexual couples, mothers perform about 60 percent of childcare. Another survey cited by Bloomberg found that working mothers spent 65 hours per week on child care and household duties — 15 hours more per week than fathers.

Even when it comes to single parents, a majority of single parents, 70 percent, are mothers, and without work benefits like paid leave, they are oftentimes forced to quit or reduce their hours to care for their children.

“We cheer for [women] for sacrificing their careers for the good of others,” says Dr. Colarco. “It tells them that they should be doing more of it and that it’s where their primary value lies.” But In the long run, it can lead to exhaustion and a decline in mental health.

Many women now report feeling that they can find success in neither their work-life nor their home life, according to Dr. Colarco. “They feel a deep sense of failure on all fronts and it’s just debilitating.”

This is why award-winning financial educator Bridget Casey recommends parents flip their mindset and view the cost of childcare as an investment in their career if they are not ready or willing to be a stay-at-home parent.

It’s not unusual for parents to temporarily go into debt to make it through the first few years of their child’s life, says Casey, a single parent herself. “No one likes it, but if you lose your job, it’s a hard choice too.”

So not only was the cost of childcare going down, but as Casey noted, her income and earnings continued to increase the longer she stayed at her job.

Have you considered “downshifting” or leaving the workforce due to childcare pressures? Whether it be cost or time? Let us know in the comments below!