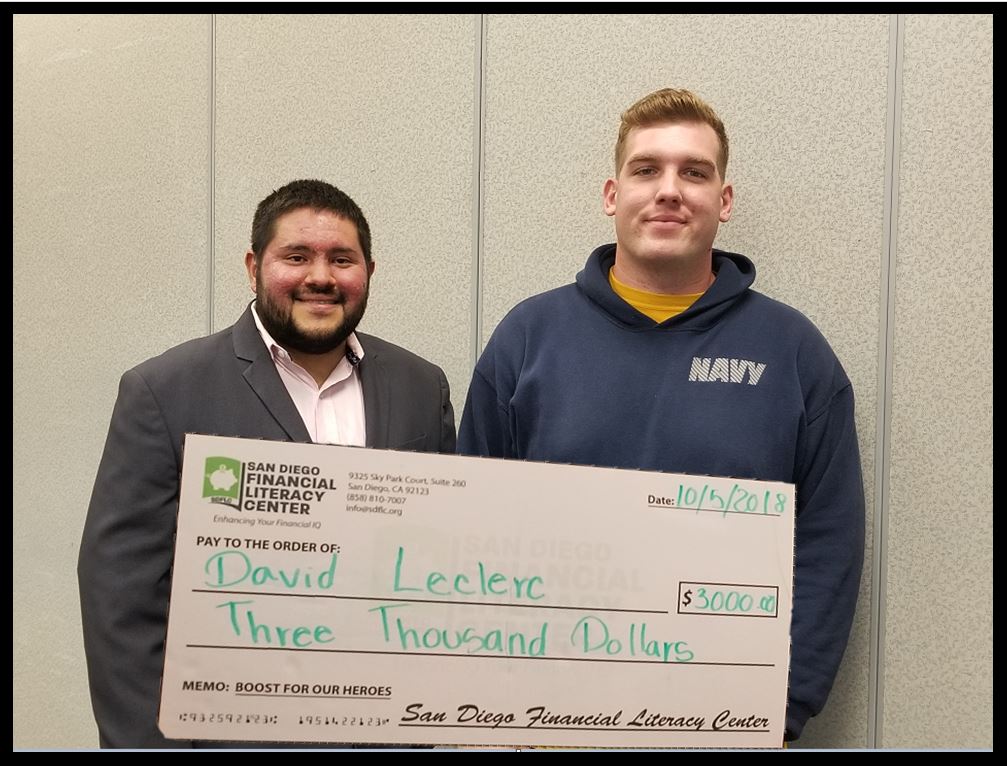 Each quarter, DebtWave Credit Counseling, Inc.’s outreach group, the San Diego Financial Literacy Center, hosts a financial assistance and education program geared toward active, transitioning, and veteran military members. At the conclusion of each quarterly event, the SDFLC awards a military member with $3,000. These are their stories.

When 26-year-old David LeClerc was young, he always imagined serving in the U.S. Armed Forces. But it wasn’t until about two years ago LeClerc enlisted in the Navy at the encouragement of his second wife, Ashley, whose father served in the U.S. Navy.

A native of Winona, Minnesota, LeClerc’s financial troubles began when his first marriage ended. While his credit was destroyed and he was left financially crippled, LeClerc managed to continue to pay child support for his two eldest children: six-year-old Jackson and three-year-old Hazel.

Life seemed to be improving for LeClerc, who married his current wife, Ashley, a native of Kentucky, on September 13, 2016. But life happened. LeClerc was transferred to San Diego, California, where the cost of housing is much higher than it is in Minnesota or Kentucky.

To avoid spending their entire Base Allowance for Housing or BAH on rent, Leclerc and his family moved into one of the cheaper military housing complexes in San Diego county. While the price of housing was right in Ramona, it was also 45 miles from the military base – one way.

LeClerc purchased a used car to travel back and forth. Unfortunately, the vehicle was broken into, resulting in the ignition being damaged beyond repair. The cost to replace the ignition alone, not including the labor, or repairs to the damaged gaskets or leaky engine, was more than what LeClerc had originally paid for the car. It was totaled. LeClerc had no choice but to stay on base instead of commuting back and forth, leaving Ashley to tend to the couple’s now seven-month-old son, Weston.

Weston was born with a tongue-tie, meaning he was born with an unusually thick and tight amount of tissue that tethered the bottom of his tongue to the floor of his mouth. Weston’s tongue-tie was corrected. However, Weston has two other conditions he’s battling: brachycephaly, meaning he has a misshapen skull, and torticollis, meaning the muscles on one side of his skull that is connected to the breastbone and collarbone, is shortened, pulling his head into a tilt or rotation.

To treat Weston’s brachycephaly and torticollis, Weston wears a corrective helmet that will adjust the shape of his skull over time.

Weston’s limited head and neck movement resulted in problems with eating as he struggled to latch and struggled to chew. He also has a very sensitive stomach and is unable to tolerate proteins found in animal milk, which includes milk that comes from not only cows but humans. Weston’s parents found a formula alternative that is also soy-free, but one can of formula costs $40.

A growing boy, Weston currently consumes three cans of formula each week at a total cost of $120.

When it rains, it pours

When LeClerc moved his family to San Diego about a year-and-a-half ago, the family’s emotional support dog, Nemesis, needed surgery on both of his knees at a total cost of $4,000, and Ashley needed a double root-canal.

Ashley recently returned to work part-time as a hairstylist and the family lives a frugal life, utilizing the benefits of food assistance programs, budgeting classes and more, but their debt continued to climb.

With just one car and their nearest relatives living hundreds of miles away, LeClerc and his family were praying for a God-send, when they found the SDFLC.

A glimmer of hope

Our award winner has been working with the SDFLC’s Community Outreach Coordinator Felipe Arevalo to establish and balance his budget, create a spending plan, develop a plan to build emergency savings and increase his credit. Combined with the education and ongoing support of the SDFLC and their partners, the SDFLC is confident LeClerc is getting a boost in the right direction.

This award will help LeClerc put his finances back in order, starting with obtaining a reliable source of transportation in which he can safely transit back and forth to work, and safely transport Weston to and from his medical appointments.

If you or someone you know is an active, transitioning or veteran military member facing any type of financial hardship, please download and fill out our application to be considered for a future Boost for Our Heroes Award. Details and eligibility requirements are included in the application.