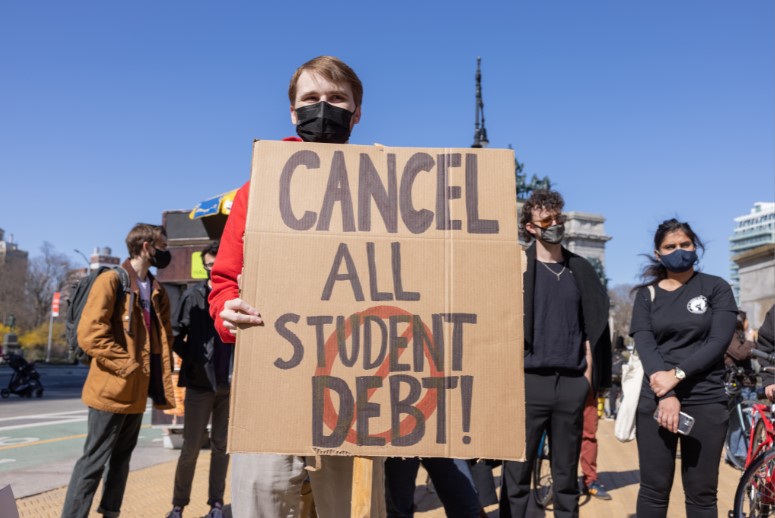 Prior to the coronavirus pandemic, student loan debt was not just rampant in the United States, the high levels of debt were delaying other big financial events for some 44 million Americans including marriage, buying a home, and having a baby.

When you look at the numbers, it makes sense why many millennials were delaying expensive life milestones and developing record levels of financial stress.

In 2018, the average college student graduated with about $29,800 in student loan debt. This amounted to monthly payments of about $393, not including interest. The average interest rate on student loans was 5.05 percent, which added about $23 to the average monthly student loan bill.

This means there are some 44 million Americans who are paying an average of $416 each month solely toward their student loan debt. That figure is more than 10 percent of the average American’s take-home pay, which is in laymen’s terms, a lot of money.

Why so much student loan debt?

College costs have steadily risen over the past few decades, making the price tag of higher education increasingly unaffordable and out of reach for millions without the assistance of student loans.

Over the past 10 years, college costs increased by more than 16 percent, and student debt increased by 99 percent. Today, roughly 70 percent of college students take out loans to pay for their education. In other words, the need for student loans is only increasing.

First-year college students responding to a UCLA nationwide survey placed higher importance on making more money and obtaining a better job as reasons for going to college in 2019 than students in the past 45 years. But the high cost of college has increased the debt that graduates have to climb out of as they start their careers.

Oh, and this was before the coronavirus pandemic caused historic levels of unemployment and economic hardship.

On March 27, 2020, the Coronavirus Aid, Relief, and Economic Security Act (CARES Act) became law. Under the CARES Act, interest accumulation and payments for federal student loans were paused in order to ease economic burdens that resulted due to the pandemic.

The pause on federal student loan repayments, which affected roughly 92 percent of the total student loan debt, was originally scheduled to sunset on Sept. 30, 2020, but was later extended to last through Sept. 30, 2021. Absent any renewal or extension, student loan payments will be due starting October 1, 2021, and interest will begin accruing from that date.

Although a freeze on student loan debt repayments is currently in place, that hasn’t stopped consumers from taking out new student loans. According to Experian, student loan debt levels grew about 6 percent per year from 2015-2019, but in 2020, it increased by 12 percent.

As of March 2021, total student debt in the United States is approximately valued at $1.7 trillion.

“There is more student loan debt than credit card debt in this country, and it’s saddling an entire generation with an economic burden, unlike anything we’ve seen before,” tweeted California Senator Alex Padilla.

Now calls for the cancellation of student loan debt are growing, with some even arguing that if Congress refuses to act, President Biden should use his executive authority to cancel student loan debt.

Student loan borrower activists and advocacy groups, labor unions, state attorneys general, and many Democratic lawmakers in Congress have been pushing President Biden for months to cancel up to $50,000 in student loan debt using his executive authority.

“Canceling $50,000 of student loan debt will provide a massive stimulus to our economy, help narrow the racial wealth gap, and take a huge burden off of millions of struggling families. President Biden should use his authority to #CancelStudentDebt.” Elizabeth Warren tweeted.

But others argue that canceling student loan debt will create other financial problems, including “moral hazard problems” if people begin to borrow money under the assumption that there will be future debt cancellations, according to a report from JP Morgan, Chase & Co.

“If people believe debt could be forgiven in the future, they may change their behavior today, taking out more debt or repaying current debt more slowly than they would otherwise,” the report says.

“A policy with a hard income limit may also induce people to adapt to the cut-off—the limit could create a marginal incentive to reduce work or to cut reported income in other ways,” the report said. “However, a one-time cancellation based on already filed tax documents could lessen these problems, insofar as the government can convince the public the cancellation is a one-time action.”

Should I Bank on Student Loan Debt Cancellation?

President Biden has publicly supported the idea of mass student loan forgiveness, but he also repeatedly emphasized his preference that Congress enact student debt cancellation through legislation. In other words, Biden is reluctant to cancel student loan debt via executive authority but hasn’t completely ruled it out either.

The problem is student loan forgiveness has become a partisan issue. For any legislation to pass, it’s estimated there would need to be at least 10 Republicans supporting the bill, as well as every Democrat. Well, not all Democrats are on board, neither is everyone in the finance world, which is why calls are growing for Biden to use his executive authority to cancel federal student loan debt.

Many student loan legal experts have pointed to a provision in the Higher Education Act that, they argue, provides broad authority to the President, via the Secretary of Education, to “modify, compromise, waive, or release student loans.”

Others point to the HEROES Act, which provided emergency authority to President Trump and allowed him to suspended interest and payments on government-held federal student loans.

However, Department of Education attorneys under former Education Secretary Betsy DeVos reached the opposite conclusion as student loan advocates, arguing that mass student loan forgiveness would go beyond what Congress had intended when it enacted the Higher Education Act and the HEROES Act.

Additionally, some analysts are concerned about the potential inequality when it comes to canceling student loan debt.

Debt Forgiveness on the Way?

And in early April 2021, the Biden administration announced that the President has asked Education Secretary Miguel Cardona to research and draft a formal legal memo outlining potential authorities that could be the basis for widespread student loan forgiveness implemented through executive action. White House chief of staff Ron Klain has also confirmed the legal review will look into forgiving debt up to $50,000.

The Department of Education is reportedly coordinating its efforts with Biden’s Justice Department, which is also reviewing possible legal avenues for student loan forgiveness too.

Since it could be weeks or months before a decision is made about student loans many consumers are now starting to wonder if they should be saving their money to repay their student loan debt or if they are free to use that money for some other life goal such as buying a house, traveling, investing in the stock market, having children, and more.

We turned to the experts for advice on how to set up your finances for the best-case scenario. The option that came highly recommended time and time again? Transfer your monthly student loan payments into a savings account specifically for your student loans.

“If forgiveness is announced in the future, you would have cushioned your emergency fund and didn’t lose out on any loan forgiveness benefits,” says Ashley Norwood-Struppa, from the AccessLex Center for Education and Financial Capability.

“If forgiveness does not occur, you can decide if taking the amount you saved and paying down your student loans makes financial sense for you.”

Would you benefit from student loan debt cancellation? How would you use the money? Share with us in the comments below!