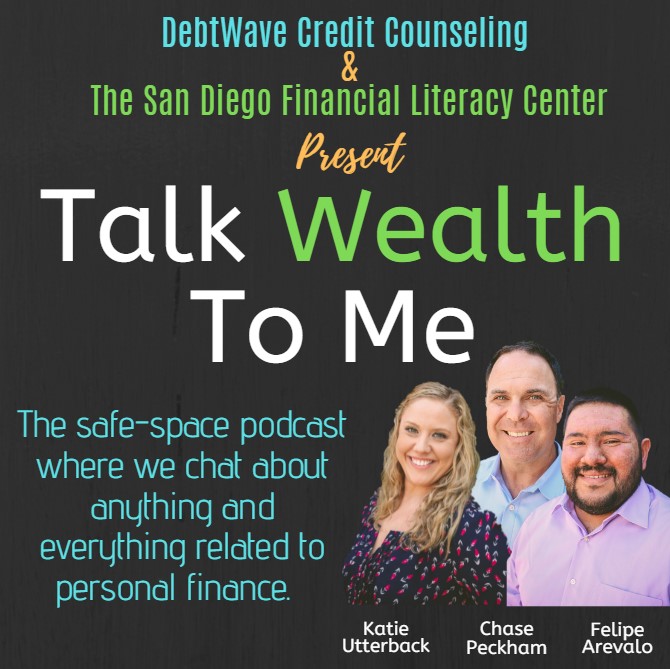 Did you know DebtWave Credit Counseling, Inc. and the San Diego Financial Literacy Center’s Talk Wealth To Me podcast now has more than 75 episodes!

We launched Talk Wealth To Me as a safe-space personal finance podcast in 2019. Our idea was to create a safe space where we can discuss anything and everything related to personal finance so that you, our listener, get a better idea of how to make your money, your budget, your finances, work for you and your family.

As we celebrate 75 episodes, we wanted to share 10 financial lessons we’ve learned from our time on Talk Wealth To Me – so far!

10 Financial Lessons from Talk Wealth To Me

In our very first episode, we shared common budgeting myths including the misconception a budget is only for the wealthy elite or for when you’re trying to make a big purchase like a home or a car. Another myth we discussed is that if we’re in debt we can’t spend any money on any entertainment or coffee.

Oftentimes we view those in debt as individuals who were irresponsible with their money and used a credit card to purchase an item out of their price range. But as it turns out, most budget-busters are items that cost on average $20 or less. Why? Because we are not thinking about how these little items add up over time and cost us big time.

The big takeaway? A budget is a PERSONAL decision. Meaning, if you don’t drink coffee or if you’re content with brewing your own at home, you can apply the money you save from coffee toward an HBO or Disney Plus subscription. The point is that a budget is a personal decision. The only MUST with a budget is that your spending MUST not be greater than your income.

When George Floyd was murdered in May 2020, his death sparked many conversations about racism, including the impact of one’s race when it comes to their finances.

Part of the reason for this conversation about race and money was because of how George Floyd was killed. The Minneapolis police were originally called to a local convenience store, Cup Foods because a counterfeit $20 had been used at the store. As the owner of Cup Foods told numerous news outlets, he was not sure Floyd knew the money was fake and law enforcement normally are called when counterfeit cash is spotted to pick up the counterfeit currency.

Regardless of whether George Floyd knew the money was counterfeit, it should have never been a death sentence. As Mark McCoy, a 44-year-old white archaeology professor at Southern Methodist University wrote:

“George Floyd and I were both arrested for allegedly spending a counterfeit $20 bill. For George Floyd, a man my age, with two kids, it was a death sentence. For me, it is a story I sometimes tell at parties. That, my friends, is white privilege.”

We continued our deep dive into racism and finances in Episode #055, when we were joined by Shawn D. Rochester, CEO of Good Steward LLC, and the founder of PHD Enterprises and the IDEA Institute, as well as the acclaimed author of The Black Tax, the financial cost of conscious and unconscious anti-black discrimination, for a conversation about racism and finances.

In this episode, Shawn explains in detail how systemic racism creates a massive financial burden on Black American households that dramatically reduces their ability to leave a substantial legacy for future generations. Systemic racism is still rooted in all aspects of our society today, and progress is still needed for Black Americans to have true equality.

This is just one example. Systemic racism has impacted housing, education, wealth, health care, criminal justice, policing, and voting. There’s no simple fix to reversing centuries of discrimination. But understanding how pervasive it is, is step one.

Women endure a slew of disadvantages when it comes to financial security.

Though it’s cheekily referred to as the “pink tax”, the additional cost women incur for personal-care products, toys, clothing, dry cleaning, health care, mortgages, and vehicle maintenance is no joking matter. It inflates our budgets, limits our ability to save, and sometimes hinders our ability to access affordable and safe sources of credit.

Based on that semi-intense description of the pink tax, you may think it’s already been made illegal to charge someone more on the basis of their gender. But that’s not true. There’s no federal law prohibiting companies from charging different prices for products that are identical (or very similar), but which are marketed by gender. At least not currently.

On top of the pink tax, women still earn less than their male counterparts. The average woman is paid 82 cents for every $1 her male colleagues earn; the discrepancy is much worse for women of color.

A study from the credit bureau Experian found that 62% of LGBTQ individuals experienced financial challenges because of their sexual orientation or gender identity.

In Episode #034, David Rae, Certified Financial Planner™, Accredited Investment Fiduciary™, and President / Founder of DRM Wealth Management LLC, joined us to provide some insight as to what kind of financial challenges members of the LGBTQ community face compared to the general population. It was in this conversation we learned that many LGBTQ community members spent excessively because they are either hiding who they are or feel they don’t have to hide who they are for the first time in their life and they want to belong to a community.

According to the 13th LGBTQ Community Survey from San Francisco-based Community Marketing:

On top of the emotional stress, life can also be financially stressful because of job insecurity and the inability to pursue higher incomes. LGBTQ persons can be fired for being gay or transgender in more than half of the 50 states.

Transgender people are more likely to have household incomes of $12,000 or less. In fact, according to the most recent U.S. Transgender survey, 29 percent of respondents are living in poverty, compared with just 12 percent of the general population.

Additionally, members of the LGBTQ Community face financial challenges such as:

The sad truth is that kids as young as two years of age are enticed to want this, want that. The “Want Monsta” is really good at making us want more than we need or can afford. We may forget we’re not born inherently knowing how to earn, spend, save, or give money. And may not even know how to even go about beginning to have these conversations with our kids.

Many parents expect their kids will learn how to properly manage their money at school. But the reality is most kids are not learning how to spend, save, invest, or donate their money at all let alone in a healthy way. This is concerning given that a report by researchers at the University of Cambridge commissioned by the United Kingdom’s Money Advice Service revealed that kids’ money habits are formed by age 7. Age 7!

Additionally, a 2017 Parents, Kids, & Money Survey conducted by T. Rowe Price found that parents who discussed financial topics with their kids were more likely (61% vs 41%) to have kids who say they are smart about money.

Given that 50 percent of marriages end in divorce, and financial issues are the leading cause for separations in the nation, we asked the experts to share tips on how to communicate about money, not just when things are going well, but when you’re making financial mistakes or even engaged in financial infidelity.

While we don’t always plan for our own marriage to fail, life happens. And as our experts explained, there are ways to protect your finances and assets – even if you’re already married. We also discussed all of the reasons why you want to pay attention to your finances just as you would if you were single.

A survey from Fidelity Investments found that nearly 70 percent of older parents expect that one of their children will manage their finances once they retire. Yet nearly one-third of the adult children who were expected to fill this role didn’t know their parents were relying on them.

The shocking stats don’t stop there:

In Episode #030, we had the privilege to sit down with financial journalist Cameron Huddleston, who recently authored a book on this very topic: Mom and Dad, We Need to Talk: How to Have Essential Conversations with Your Parents About Their Finances. Cameron shared so many tips with us on not only how to bring up this conversation with your aging parents, but how to discuss the sticky topic of family inheritance with your siblings and in-laws, as well as why it’s better to have this conversation with your parents while you can, instead of waiting until it’s too late.

Have you ever wondered why you have the relationship you do with money and finances?

For years financial professionals have known our childhood experiences with money shape our perception of money and our ability to save, spend, invest, and donate. But many of us were unaware of our money stories not just from our own life experiences, we were unaware of the experiences our parents, grandparents, and other ancestors had with money.

As it turns out, experiences with money, particularly those of a traumatic variety, can shape our perception of money and our ability to successfully use it as a tool for generations.

One guest started out his career as a pastor and now earns a six-figure income as a freelance writer. Another guest shared how he uses real estate investments to earn a passive income that pays his family’s mortgage, expenses, and more. While a third guest shares how she became a self-published author and now earns more than what she earned working 9-5.

One of the most eye-opening findings is that for every financial need there seems to be a financial advisor or at least a financial coach.

For example, in Episode #015, we were joined by Laura Coleman, a Tennessee-based Accredited Financial Counselor with a special niche – preparing couples financially for fertility and adoption. The Average American has a savings balance of $16,420. With the cost of an average adoption at $43,239, how is a couple able to afford adoption?

After experiencing firsthand the financial burden and stress that accompanies the fertility and adoption process, Laura felt called to start her blog, podcast, and financial coaching practice: Family Money Coaching.

In Episode #020, we sat down with Deborah L. Meyer, CPA/PFS, CFP®, the author of Redefining Family Wealth: A Parent’s Guide to Purposeful Living, for a conversation on why faith and finance don’t have to be separate, as well as how the power of prayer works hand-in-hand at viewing your finances from an abundance mindset.

And in Episode #035 we were joined by Cathy Seeber, a vice president and financial advisor at CAPTRUST, for a conversation on how addictions are sometimes first spotted by a financial advisor and the steps we can take to financially protect our loved ones recovering from addictions.

This episode was so large and so powerful we actually had a roundtable and discussed our own experiences with addiction and its financial impact in Episode #036.