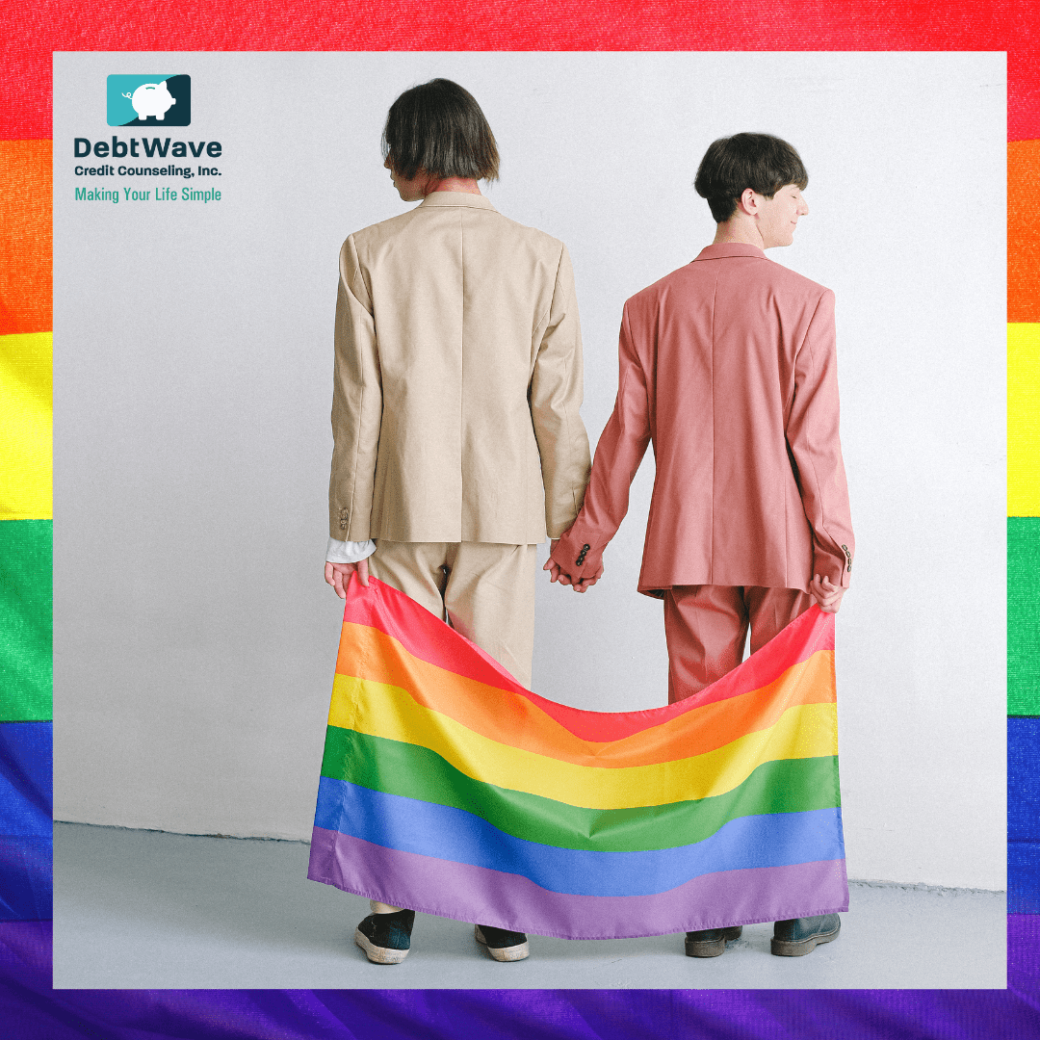 Roughly 20 million people, 7 percent of the American population and 21 percent of Generation Z identify as LGBTQ+, making the LGBTQ+ community the fastest-growing minority in the United States.

Together this growing group of Americans has a combined purchasing power of $1.4 trillion, putting this group’s financial power on par with Hispanic Americans, African Americans, and Asian American Pacific Islanders.

But did you know that 22 percent of the LGBTQ population makes less than $12,000 annually than their heterosexual counterparts?

Or that LGBTQ+ people are 73 percent more likely to be denied a loan from a financial lender?

When it comes to financial goals, the LGBTQ+ community is interested in:

But a new May 2022 landmark survey from The Motley Fool and the Debt Free Guys found that many LGBTQ+ Americans are struggling financially to achieve long-term financial health goals including generational wealth.

In honor of Pride Month, let’s take a closer look at the financial state of LGBTQ+ Americans.

Data is still lacking when it comes to the financial health and well-being of those who identify as LGBTQ+. But a 2018 study from the credit bureau Experian found that 62 percent of LGBTQ individuals experienced financial challenges because of their sexual orientation or gender identity.

Members of the LGBTQ members face financial and emotional challenges such as:

In April 2022, the Motley Fool/Debt Free Guys conducted a survey of LGBTQ+ financial health. Analysis of the survey results found almost two-thirds of LGBTQ+ Americans are living paycheck-to-paycheck; the number is closer to 72 percent for those who identify as Black LGBTQ+ members.

This is concerning to many as LGBTQ+ members can be fired for being gay or transgender in more than half of the 50 states due to an absence of policies and laws protecting this group when it comes to employment, housing, and other social services.

Plus not all financial organizations or advisors are prepared or willing to serve LGBTQ+ Americans.

A May 2022 survey from Nationwide Retirement Insititute found that LGBTQ+ Americans are less likely to be on track to meet their financial goals, less likely to absorb unexpected expenses without incurring debt, and less likely to save for retirement compared to the general population.

According to the survey:

Top Financial Concerns for LGBTQ+ in 2022

1. A Plethora of High-Interest Debt

Most concerning for financial professionals is the high amount of credit card debt this group has. Credit card debt is arguably the most burdensome form of debt and most likely to create financial and emotional stress for the borrower as these forms of debt typically come with higher interest rates and are less manageable compared to auto loans or a mortgage.

Coincidentally, auto loans and a mortgage are two forms of debt that LGBTQ+ persons are less likely to have compared to the overall population. This is a concern because homeownership is a financial milestone and an important way to build wealth but only 26 percent of LGBTQ+ Americans have a mortgage compared to 40 percent of the overall population.

After a 60-minute complimentary budget analysis, your DebtWave certified credit counselor will help you determine not just your outstanding balance on your different credit cards and/or lines of credit; he or she will also help you understand how much of your payment is going toward interest and fees, and how much is actually going toward paying off your debt.

Your credit counselor will even detail those figures further with you by showing you how much you can save if you enroll in the nonprofit’s debt management program (DMP), enroll in a debt settlement program, declare bankruptcy, etc.

A lower percentage of LGBTQ+ Americans have an excellent (800–850) or very good (740–799) credit score compared to the overall population.

The difference in credit scores between LGBTQ+ Americans and the U.S. overall is small.

However, the difference is worth noting given that credit scores are used to determine whether a bank will provide a loan, what your interest rate would be, and which credit cards a person qualifies for.

Your credit score can also be used to make decisions about your ability to make timely payments to organizations and companies including potential employers, landlords, utility companies, and insurance providers.

At DebtWave, we offer our clients complimentary one-on-one sessions with our credit coach as well as an online financial education workbook, free financial literacy classes, and more to help you improve your financial literacy in the hope it will lessen the likelihood you experience burdensome debt in the future.

While the percentage of LGBTQ+ Americans who have a bank account is similar to that of the overall U.S. population, those who identify as LGBTQ+ tend to have less money saved in their account compared to the general population.

Although LGBTQ+ Americans have savings accounts at similar rates as the general population, LGBTQ+ persons are less likely to have other savings-related accounts like:

For those LGBTQ+ Americans who do have a retirement savings account, the majority contribute less than 7 percent of their income to their retirement plan.

Due to lower company-sponsored retirement contributions, only 39 percent of LGBTQ+ Americans think they’re on track to retire by the age they’d like to.

For many LGBTQ+ Americans, keeping up with the cost of living and financially preparing for an emergency is top of mind.

Given the current high rate of inflation, it’s no surprise that keeping up with the cost of living is a top financial priority and concern among LGBTQ+ Americans as the rising cost of living may make saving more difficult.

LGBTQ+ community members are a third more likely to be concerned about their ability to afford long-term care costs compared to the general public.

Long-term care is extremely expensive. Health care is expensive. But the reason many people in the LGBTQ+ community turn to assisted living facilities later in life is that many are retiring without children to help assist them through the aging process. Without offspring to help advocate on your behalf as you age, you will need to turn to paid services like health care proxies to determine who can help make decisions on your behalf if you were to become incapacitated.

Due to pervasive discrimination within many elder care facilities, both from residents and staff, many gay and lesbian seniors essentially have to go back into the closet in their retirement communities if they cannot afford to have in-home health care or find an LGBTQ+ retirement community, which is why financial planning for this particular expense is so incredibly stressful for many in the LGBTQ+ community.

Hope on the Horizon

Although the state of LGBTQ+ finances has historically left much to be desired, change seems to be on the horizon.

David Rae is a Certified Financial Planner and was a featured guest on DebtWave Credit Counseling, Inc. and the San Diego Financial Literacy Center’s personal finance money podcast, Talk Wealth To Me, in Episode #034.

In a May 2022 piece for Forbes, Rae shared that wealth creation is happening at a faster pace among diverse communities in the U.S. compared to the general population, particularly among the LGBTQ+ community.

“As a gay financial planner who works with many people from these groups, this is great news,” Rae said.

“Before you pop the bottle of Dom Perignon (or your favorite celebratory beverage), there is still a pay gap based on sexual orientation, gender, and race,” Rae said. “Furthermore, in light of the expected repeal of Roe v. Wade, LGBTQ+ rights could be more successfully attacked (they are always under some type of attack – not to sound too pessimistic),” he added.

“When it comes to LGBT financial planning, the gay community faces unique challenges. We are up to the task of overcoming them and staying on track for our fabulous and gay financial goals,” Rae said. “Keep your head up and make smart money moves. You, too, can reach financial freedom.”