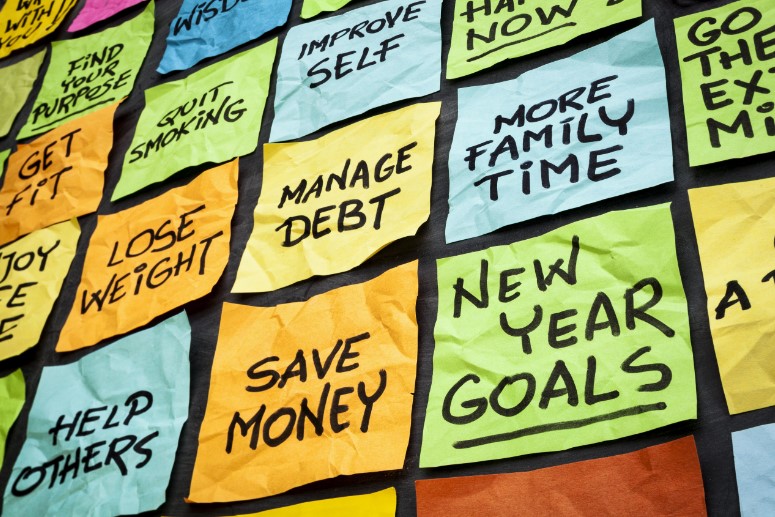 At the start of each New Year, we’re encouraged to set goals and resolutions for ourselves. The idea is that with the year ahead of us, we may be inspired to bring something new to our daily routine or break up with an old habit.

Typically the most popular goals are ones involving health, fitness, and money. And it makes sense! We’ve all just experienced the sugar-rush of the holiday season and some of us are sweating over just how much we accumulated, not just around our waistline, but on our credit cards.

Even if we managed to avoid incurring holiday credit card debt, we may have a money goal embedded in our goals such as:

So what’s the best way to turn these resolutions into our reality? Enter S.M.A.R.T. goals or goals that are Specific, Measurable, Achievable, Realistic, and Time Sensitive.

It’s when we turn our goals and resolutions into S.M.A.R.T. goals that we see the most success.

So how do we do that?

First, we need to figure out what exactly your goals in life include. So think about what you want to achieve in the next five to 10 years and write those goals down.

Now, based on the goals you have written down, we’ll turn these into S.M.A.R.T. goals.

Let’s say your goal is to pay off your credit card debt. You wouldn’t want to just leave that as your goal because it doesn’t give you any specifics with how much you’re paying off, nor does it include motivation, steps to take to move toward that goal nor a time frame.

Another bonus with S.M.A.R.T. goals?

They help you accomplish your goals faster by giving us a chance to see the other ways we can achieve success.

So in other words, let’s say you’re already working on paying off your credit card debt and you’re enrolled in DebtWave’s debt management program because you realized it was the high interest that was keeping you stuck in a cycle of debt more than your spending patterns.

You might be watching your debt amount go down, but what if it moved faster?

Think about it: If you could pay an extra $200 a month toward that debt, what would happen?

Maybe you realize after writing out your S.M.A.R.T. goals that you could be debt-free by June if you had an extra $200 a month. Once we know that figure we can start looking at where to find that $200.

Maybe you find cutting down on streaming services or cutting back on eating out for a few months does the trick. Or maybe there’s nothing left to cut, but you find a side hustle earning $500 a month and now you’re not only debt-free sooner than you anticipated, but you’re also moving that money toward your other goals like a fully-funded emergency savings account or a down payment on a home.

The point is there are choices, it’s all personal and unique to you. And that’s part of the beauty of personal finance.