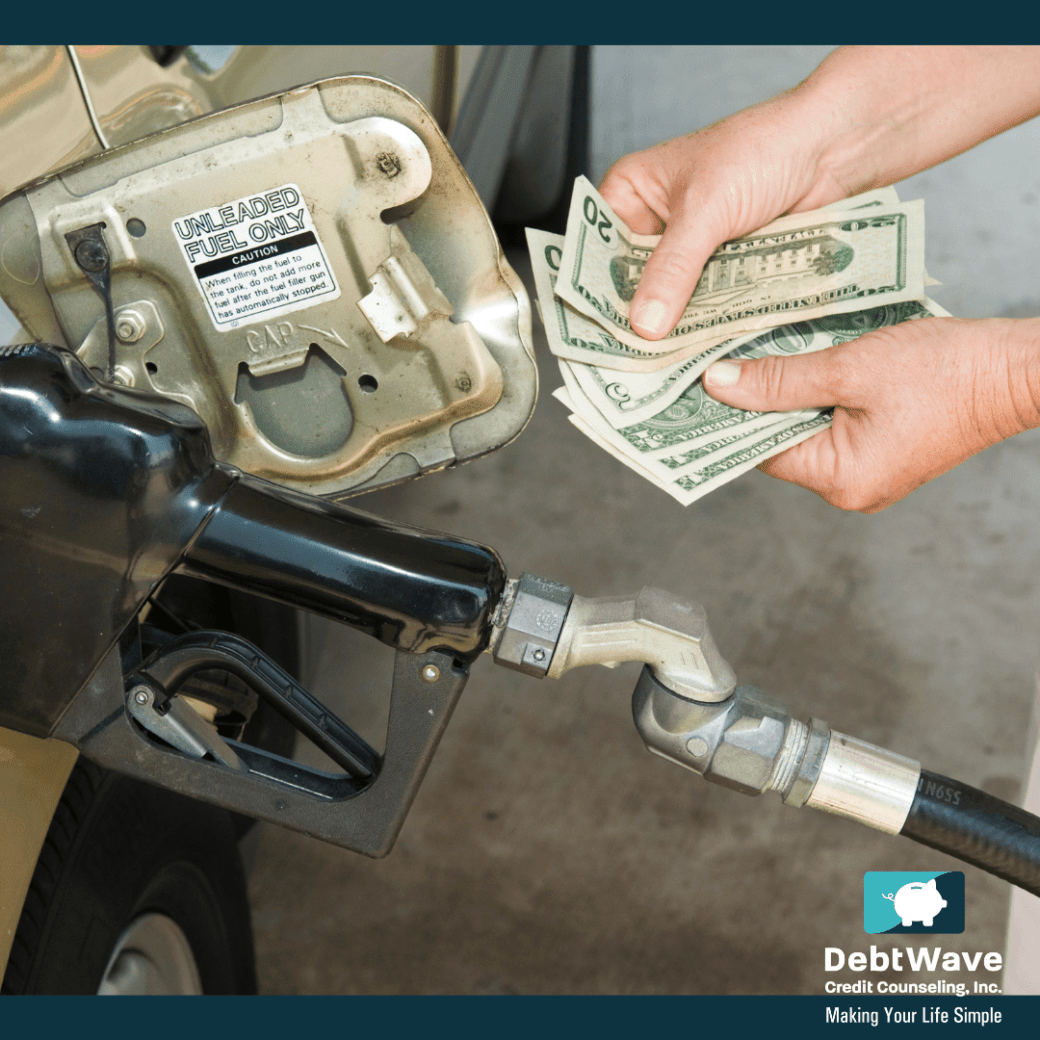 Inflation, supply chain issues, and now war. Prices on goods and services have all continued to steadily climb at the fastest rate in four decades, putting inflation at around 7.9 percent at the end of February 2022.

Patrick DeHaan, a senior petroleum analyst at GasBuddy, a website and app that helps drivers find the best gas deals nearby, said that the No. 1 cause of the current spike is the Russian invasion of Ukraine, and the economic sanctions many countries have levied against Russia.

Americans will be paying stratospheric prices at the pump for the foreseeable future, according to Jack Gillis, executive director of the Consumer Federation of America.

Russia, DeHaan says, produces about 10 percent of the 10 million barrels of crude oil the world uses every day, making it a significant player in the oil supply game.

Currently, the national average price for a regular gallon of gas topped $4 a gallon for the first time in more than a decade, and as DeHaan says, fuel costs are expected to continue to soar. The highest average prices are in Hawaii and California, at $5.57 per gallon, and the lowest are in Kansas and Oklahoma, at $3.79 per gallon. But there can also be significant price disparities among prices at filling stations in the same town.

For example, according to GasBuddy’s gas price map, the Speedway Express station at 4069 State Street in Santa Barbara, Calif., is charging $5.29 per gallon for regular right now, while only a few miles away, the Chevron station at 1085 Coast Village Road is charging $5.89 per gallon.

That means that choosing where you buy gasoline can make a big difference in how much you’re spending to fuel your vehicle. Putting 15 gallons of regular gasoline into a small SUV would cost $9 more at the Chevron than at the Speedway Express. That difference can really pile up—to the tune of $468 a year with a weekly fill-up.

There are also drivers who buy higher-cost premium gasoline unnecessarily for cars designed for regular fuel, according to a study by AAA.

Based on current national average gasoline prices, midgrade gasoline ($4.55) costs about 30 cents per gallon more than what you’d pay for regular; and premium gas ($4.83) costs almost 57 cents more than regular on average, according to AAA. For a 15-gallon fill-up, that’s $4.50 more for midgrade and $8.70 for premium!

15 Ways to Save at the Pump

1. Use Apps, Websites to Find Low Prices Near You

Smartphone apps like the ones from GasBuddy, AAA, and Gas Guru, are particularly convenient when you’re traveling and in need of the most affordable gas fill-up station near you. Many of these apps are free, and some even allow you to filter results by fuel grade, distance, and price, as well as get GPS-guided directions to the station you choose.

You’re likely to find that you may be able to get a better deal at stations that are not located on major highways, says Michael Calkins, a manager at AAA. Of course, making a big detour to pay less might not make sense.

GasBuddy and Fuel Finder also let you check stations for amenities such as ATMs, restaurants, and car washes. GasBuddy has station reviews, which might tell you, for instance, which restrooms to avoid. And Gas Guru lets you save your favorite stations, so you can remember where to stop on your way back. Google Maps and Waze apps also offer gas-price info.

Some stations offer a lower price if you pay with cash instead of a credit card. The difference between the cash and credit price usually ranges from around 10 to 15 cents per gallon, DeHaan says, but it can be as high as a dollar.

If you plan to pay by debit card, don’t assume that you are getting the cash price. Some stations could charge you the credit card rate instead.

Check the posted prices at the pump. Selecting the debit option and entering a pin when you pump your gas is often a good indication that your transaction will be handled as cash, says Lyle Beckwith, senior vice president of the National Association of Convenience Stores, based in Alexandria, Va.

Another option is to pay with a cash-back credit card that pays you cash back or one that allows you to earn rewards points when you purchase gas.

While the credit card price may be higher than the cash price, the reward you receive could make using the credit card a better deal. Just be sure you can pay the fuel charges off in full each month so you’re not paying interest on your gas purchases.

A rewards credit card could even provide greater savings than a gas credit card from a big oil company (such as Texaco or Chevron), DeHaan says. Some cards offer introductory cash or points bonuses for signing up, and others offer discounts at the pump.

The Bank of America Customized Cash Rewards credit card, for example, offers a $200 bonus to people who spend $1,000 on purchases during the first nine days of card ownership. The ExxonMobile Smart Card, by contrast, gives a 6-cent discount per gallon of fuel purchased.

It may sound silly, but with prices being as high as they are, it’s a good idea to keep your lead foot off of the accelerator pedal. That means reducing your rate of acceleration when driving around town, and on the highway, keeping your speed below 75 mph.

Driving faster than 75 mph means the wind resistance eats into your fuel economy, DeHaan says. “Reducing your speed to 65 on the highway can increase fuel economy by as much as 15 to 20 percent,” he says.

Making sure your car’s tires are properly inflated to the pressure indicated on the sticker inside the driver’s door will make it run more efficiently. Even just a few pounds of deflation can add up. The estimated daily cost of 3 psi deflation is 68 cents, but 10 psi deflation will cost you $3.33 per day.

6. Reduce the Number of Car Trips

If you can avoid traveling by car, either by walking, taking public transportation, or staying home, you’ll save money at the pump. If you do have to drive somewhere, try to bundle errands and appointments so you don’t have to make multiple trips and use more fuel.

When it comes to saving at the pump, the factor that has the biggest impact tends to be the hardest to change — your driving habits. “American consumers have more power than they realize,” says Patrick De Haan, head of petroleum analysis at GasBuddy. “If you look at the pandemic, people stopped driving and prices plummeted.”

Driving less, running errands when you are commuting, and planning your outings to be more efficient can go a long way toward curbing your gas outlays.

If you live near your co-workers and have similar schedules, take turns driving so you can all drive less each week. Organize a carpool with neighbors or friends to transport your children to school or extracurricular activities, and swap driving duties among the parents.

Don’t start the car and then leave it running for a long time while you wait for everyone to get in or to fiddle with your navigation. Make sure you’re ready to go before starting your engine. Idling just wastes gas and causes more air pollution.

Gradually come to a stop and gradually accelerate. Generally, the faster you accelerate, the more gas you use. Be gentle on that pedal when getting up to highway speed. You’ll also get better mileage by coasting more, so look ahead for stops and turns. Take your foot off the gas a bit sooner, and slowly glide to a stop.

11. Reduce the Use of Your Heater and Air Conditioning

Blasting the heat in the winter or the A/C in the summer has an effect on your car’s fuel economy. But then again, rolling down the windows contributes more to increased fuel consumption since wind resistance from open windows creates drag on your vehicle. The best advice? Lower your windows when driving at low speeds. But if you are driving on the highway or above 30 miles per hour, it may be more fuel-efficient to use the air conditioner.

The less you have weighing down your vehicle, the better gas mileage it gets. Look at what you’ve got in your car and remove anything you don’t need. The neglected sports equipment in your trunk can go along with anything else you’ve just been storing in your trunk or backseat.

If you don’t use that bicycle rack every day, remove it. Take off that ski rack while you’re at it too. Racks are extra weight and create more wind resistance — both of which reduce gas mileage.

If you are in the market for a new car, consider an electric or hybrid vehicle that uses less gas consumption by default.  Studies show that a typical electric vehicle owner who does most of their fueling at home can expect to save an average of $800 to $1,000 a year on fuel costs over an equivalent gasoline-powered car.

If you were already on the fence, it may be worth joining Costco or Sam’s Club, warehouse clubs where you can buy fuel at discounted prices. “Gas prices at warehouse clubs are nearly always lower, ranging from 5 cents to 25 cents less per gallon,”  says De Haan. “And when prices rise, they hold their prices down for longer.”

But before you sign up, consider the costs. Warehouse clubs charge annual membership fees, which generally range from $45 to $120 a year, depending on the club and level of membership.

Still, the gas discounts alone may be worth the membership cost, though your savings will vary depending on your location and your mileage.

If you get an average of 20 cents off a gallon of gas, you could save around $112 a year, assuming your driving uses up an average of 562 gallons annually. That savings alone would more than offset the cost of a basic warehouse membership or even cover most of a higher-tier membership fee.

What gas-saving tips have you used to limit sticker shock at the gas pump? Share with us in the comments below!