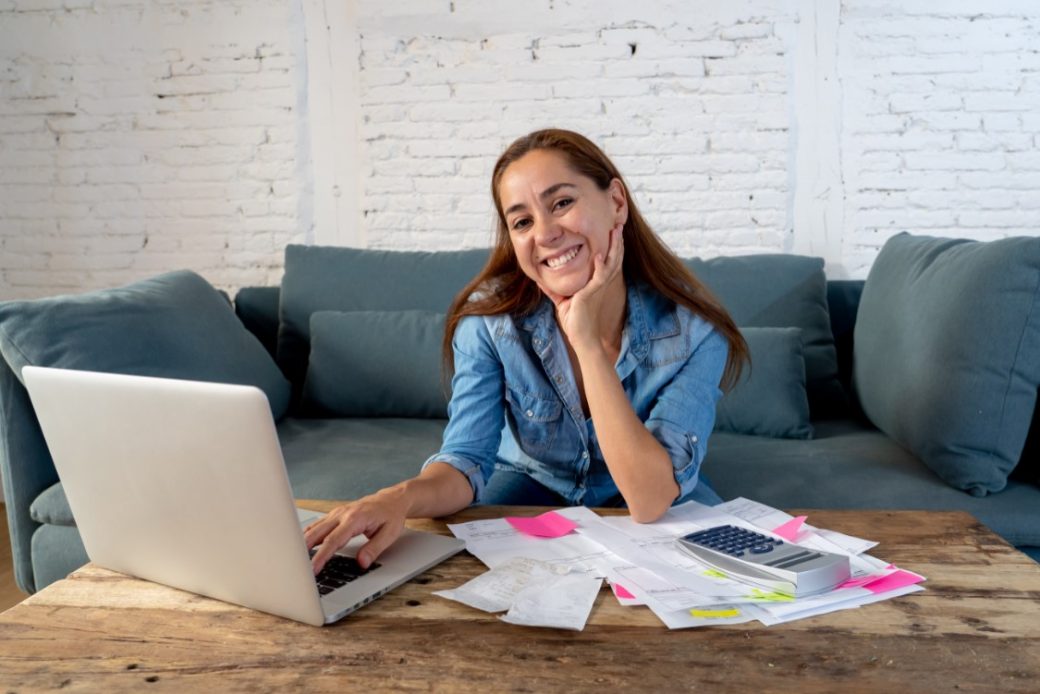 If you’re a fan of personal finance topics, blogs, and apps, you may have heard of Jackie Beck.

Her award-winning Pay Off Debt app has been featured in The Oprah Magazine, Forbes, The Costco Connection, Yahoo Finance, and several others. She has an active blog where she continues to share her thoughts on budgets, credit cards and debt, as well as motivate those paying off debt to keep fighting to be debt-free.

We sat down with Beck to glean some wisdom from her journey to become debt-free and apply it to our own lives. Check out our conversation below!

This may surprise some of you, but Beck wasn’t always interested in personal finance. In fact, the Arizona resident says she only started paying attention when she realized her own finances were a mess.

“Most, or almost all, of the debt I had was a result of being a typical American with a student loan, a house payment, and general expenses,” Beck recounted. “There was no big dramatic thing that put me in debt.”

Though Beck notes there were a few occasions when she experienced a big medical expense, she admits her debt was a result of living beyond her means.

While Beck was ready to tackle her debt head on, when she started her debt free journey, she was not aware of exactly how much she owed. “We never added up our total debt until we finished paying it all off,” she said. “It can be discouraging to realize how much debt you have.”

Instead, Beck and her husband decided to pay their debts one at a time. To begin, they started paying back the $17,000 they owed on their three credit card accounts with the help of a credit counseling service. Three years later, Beck’s credit cards were paid off, and she and her husband pledged to never carry a balance on a credit card again.

Not too long after their credit cards were paid off, Beck was laid off.

Prior to losing her job, Beck had been unsuccessful at sticking to a budget. But now she had no choice. “I really couldn’t be tempted to spend if I wanted to eat,” Beck recalled. “I learned to live on pretty much nothing.”

Flash forward four years and Beck lands her first full-time job since she was laid off.

Beck and her family hadn’t turned to credit cards during that time, but still owed money on her student loans and their mortgage. Additionally, during those four years Beck sought employment, Beck’s husband took out a car loan and she had borrowed money to buy a rental property. AKA they owed more now than they did four years ago.

The idea that Beck and her family could be debt-free was starting to look like a reality, at least in her mind.

Talking about her debt payoff journey with others – including strangers in the grocery store – was motivating for Beck. “Their reaction kept me motivated,” she said.

“When I get obsessed with something I can’t stop talking about it, and that theme continued with paying off debt,” Beck shared. “Being obsessed really help. The things you pay attention to are what you make progress on,” she says.

It took Beck 10 years of literally paying off one debt at a time, but now Beck and her family are debt-free.

“People are always asking for tips or saying ‘wish I could do that too’,” Beck says about her debt free status. “I find that sad because many times they can!”

Beck recognizes the mental toll that paying off debt can have on people, and stresses the importance of changing your mindset when it comes to finances.

“If you have enough money to pay your bills, in theory, you should be able to get out of debt,” she says.

For those, like Beck, who earn a pretty decent living but still live paycheck-to-paycheck, Beck says there’s nothing wrong with taking a break in between paying off your debt, so long as you don’t incur more debt moving forward.

During her debt payoff journey, Beck and her family traveled to various places in the U.S., as well as exotic destinations like Paris and New Zealand. The family also incurred unexpected expenses like multiple surgeries, braces, weekly veterinary visits for the family’s sick cat, home improvements, and minor and major car repairs.

How did Beck survive?!

“Only spend money you already have,” Beck recommends. “Save up the money first! You can have a life too, but only do it with money you have in advance.”

Jackie’s Advice for Paying Off Debt

The biggest tip I recommend to those looking to stay motivated to pay off their debt is to track your spending as you are going throughout your day – not at the end of the month or at night when you’re reflecting on your day.

“If you go buy a hamburger for $6, write it down and see how you feel about it,” says Beck. “Did you receive any value from that burger? Was it worth the cost?”

Beck notes it’s easier, at least in her experience, to eliminate or reduce expenses that are less important to you when you can see in black-and-white just how much something you’re spending on something like eating out at lunch, and how it makes you feel.

“Everybody has setbacks,” notes Beck. “Expect that those will happen and try not to be discouraged by them,” Beck recommends.

“Make no new debt the focus!” Beck shared. “If you really focus on not borrowing any new debt, no matter what, then, as long as you make minimum payments on your credit cards, if not more, you will get out of debt.”