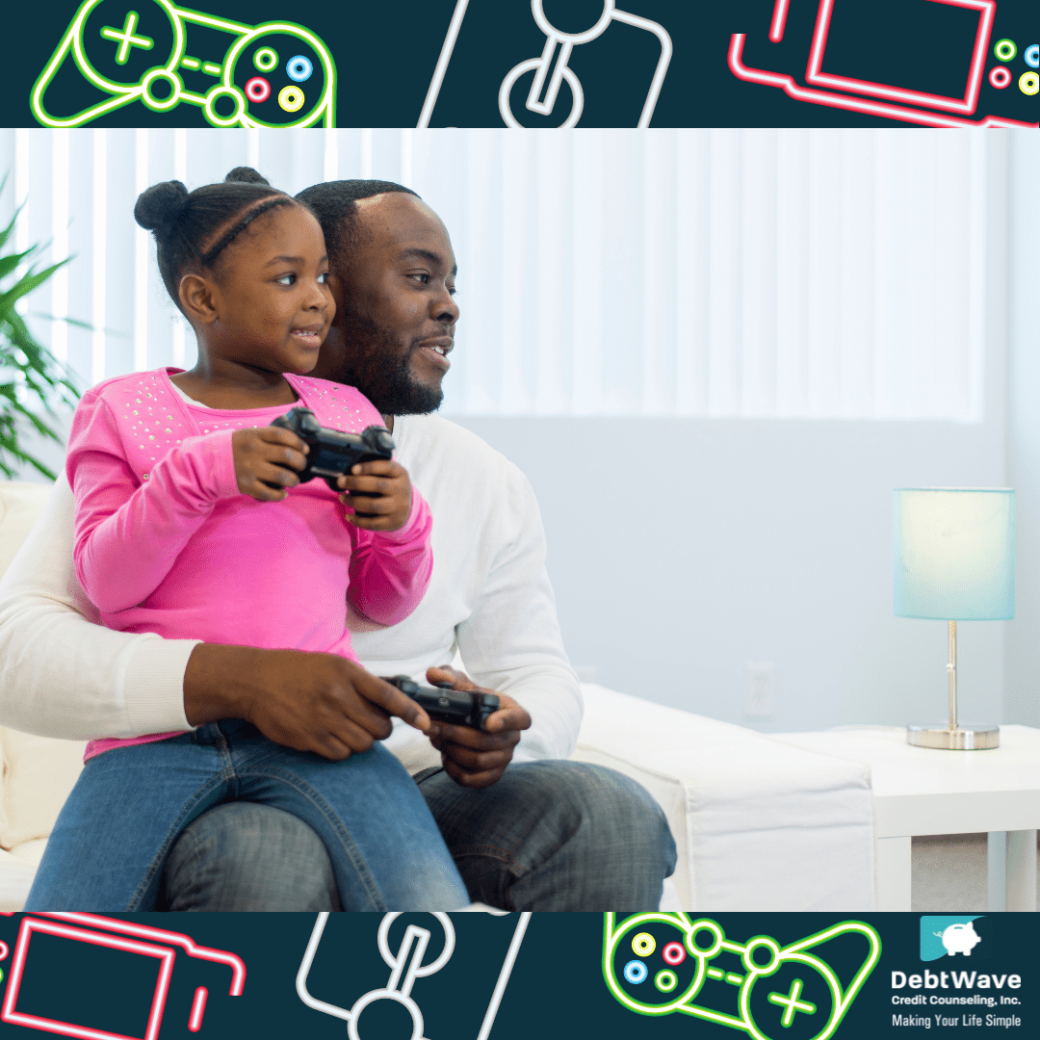 The other day my partner was playing a computer game with his friends, as he often does when I overheard my partner share that he was nervous because his property taxes were due soon and he didn’t currently have the funds to pay the taxes. “Looks like I have to go sell some stuff,” he announced with a sigh.

Internally I didn’t know whether I should rage or cry. What did he mean we didn’t have the funds to pay our taxes?! How could we have ended up in this situation where our only option is to panic sell what we can?!

I kept waiting for my husband to walk into my office and break the bad money news to me, as we are both well aware we can hear one another from our respective offices, but he just kept playing his computer game with his friends.

I meanwhile, started looking through the closets and cabinets for anything and everything I could sell. I was waist-deep in my closet when my husband appeared and asked me what I was doing.

Looking for items to sell so we can pay our taxes? Duh!

When I tell you the look on his face was befuddled, I mean, he looked at me like I had had a head transplant. As it turns out, the property taxes my husband was referring to were property taxes he owed in a computer game.

It was in the game he felt forced to sell items to afford his weekly property taxes, not our real life.

Reader, my husband is a gamer, I am not.

The idea that one would have to worry about earning money to pay taxes while playing a video or computer game never occurred to me. So I had to have my husband explain this gamification of money to me further.

Was this fun for him to have to work, earn money, just to pay taxes in this game as we did in real life? For him, the answer is a resounding yes.

As it turns out, my partner has an in-game wallet, which looked similar to an online banking account dashboard. He showed me how much money he had in his savings account, a list of his bills, a list of items he owned, and a list of how much money he had to earn each week to pay his weekly property taxes, there might be more to these gamer wallets, but this is all I could digest at the time.

Plus, in addition to his in-game wallet, my husband had a storage container in his in-game house filled with raw materials like lumber and hemp and tons of items to make food.

My partner shared that every week he pays his property taxes on his in-game house, so he started collecting as many raw materials in the game as possible. He then sells the raw materials for additional funds in the in-game marketplace, allowing other players in the game to craft their own materials, or he’ll craft the items himself and sell the finished product in the marketplace.

As my partner was explaining how certain tools or materials are needed to level up in the game, a notification flashed on the screen, Congratulations, you’ve been paid $444.

He explained that this notification meant he had received a deposit in his wallet as one of his crafted items had been purchased by another player. My partner barely finished this sentence when another notification flashed on the screen. Congratulations, you’ve been paid $777.

In a matter of minutes, I watched my husband’s in-game wallet grow from $4 to more than $8,888 from just selling a few items. Now, he not only had the funds to pay his property taxes this week, but he seemed to be set for a while.

Yet even as these money notifications continued to stream in, my partner continued to go back out to the fields and collect more raw materials. He continued to craft items, sell them on the marketplace, and repeat.

He shared with me that the raw materials are only available at certain times for $111, and normally these items cost closer to $5,555. He wanted to make sure he had a comfortable stockpile so that if he had to sell his raw materials or craft items to pay his taxes again that he wouldn’t be caught empty-handed. And that’s when I realized that my husband – who claims to hate math, numbers, and budgeting – was learning about personal finance while playing his computer game – and having a great time doing it.

Here he was learning how to budget, save, invest, the benefits of a side hustle to help you achieve your money goals sooner than later. Not only was he learning all of these financial literacy tools, but he was also learning to change his money mindset. He was moving toward an abundance mindset – where you’re always able to see the silver lining, that there’s an opportunity to earn more, create more, sell more.

Yet my partner had no idea he was doing anything related to personal finance. He wasn’t aware he was improving his financial literacy because he was working on his relationship with money in an environment that felt safe and familiar to him. In his eyes, he was just destressing after work, hanging out virtually with his friends, and doing something he enjoys – playing computer games.

While the idea of playing this or really any computer game doesn’t entice me the same way it does my husband, there is something to be said about the financial lessons we can learn from games, not just computer games or video games, but board games too!

Take the board game LIFE for example. In the game of LIFE, players compete to see not only who can retire or complete the game first; but it’s also a competition to see who can finish the game with the most amount of money remaining.

And this is easier said than done because, in the game of LIFE, you can start off the game in debt. That’s right, players begin the game of LIFE by deciding whether they want to go to college or not. If you decide to go to college, you start off the game with student loan debt. If you opt to just enter the workforce and get a career, you won’t be straddled with student loans, but the higher-paying career opportunities will not be available to you.

Although it’s worth pointing out that even if you go the college route, there’s still a chance you could end up with a career that had nothing to do with your degree, to begin with.

As players embark on the winding journey of life, which can include marriage, babies, buying a home, emergency expenses like a car breaking down, or the chance to win the lottery, eventually the game of life comes to an end. We enter into retirement.

The winner of the game of LIFE then is not necessarily the player who reaches retirement first, rather it’s the player that has the most money once they reach retirement. The player who managed their money the best in the game.

Sure, some might argue luck has something to do with success in these games – beginner’s luck, lucky dice, a lucky _____. But the same thing happens in real life with real money.

And I would argue that if we look deeper at games – board games, video games, and computer games, we could see we have even more to learn from these games about saving, investing, budgeting, and even paying debts. What’s so exciting about this gamification of money is that it gives us an opportunity to learn these financial concepts while having fun.

Take the board game Monopoly for example.

In Monopoly, players take turns moving around the game board. The goal is to end up with a Monopoly and essentially bankrupt the other players by buying up as much property as you can as quickly as you can.

If the players land on any space that is “owned” by another player, they have to “rent” that space on the board by paying a player a fee based on the value of that location. If you land on a space that you own, you don’t owe anyone anything. But if another player lands on your space, they’ll owe you money. And if someone has the chance to buy a group of spaces in a similar area, well then the “rent” owed for landing on those spaces can skyrocket. And once the board game is filled with crippling rents, some players are forced to go “bankrupt” and lose everything they have.

In Monopoly, like LIFE, the goal is to end up with the most amount of money. But unlike LIFE where all players have the chance to retire with money, Monopoly is a game where the winner takes all.

Not all games require the other players to lose it all in order to teach personal finance lessons though – take Dungeons and Dragons or D&D for example.

In this game, players tell a shared improvisational story, but the details of the story are sometimes challenged by the moderator or “Dungeon Master” who asks the players to roll a dice to see whether or not the character was successful at being charismatic, stealthy, gave a good performance, etc.

In this game, you not only have to know how to add and subtract based on the dice you are asked to roll, but you also have to manage a wallet and spend money to repair broken tools, clothing, weapons, as well as buy healing potions and food.

While we don’t all equally enjoy computer games, video games, and board games, it’s exciting to know that when it comes to learning personal finance tools like saving, budgeting, paying off debt, and investing, that we can have fun and enjoy ourselves too. It’s comforting to know that we can play games with our friends and end up having a better relationship with money in the real world too.

Have you used games to learn about money? Share your favorite money games in the comments below!