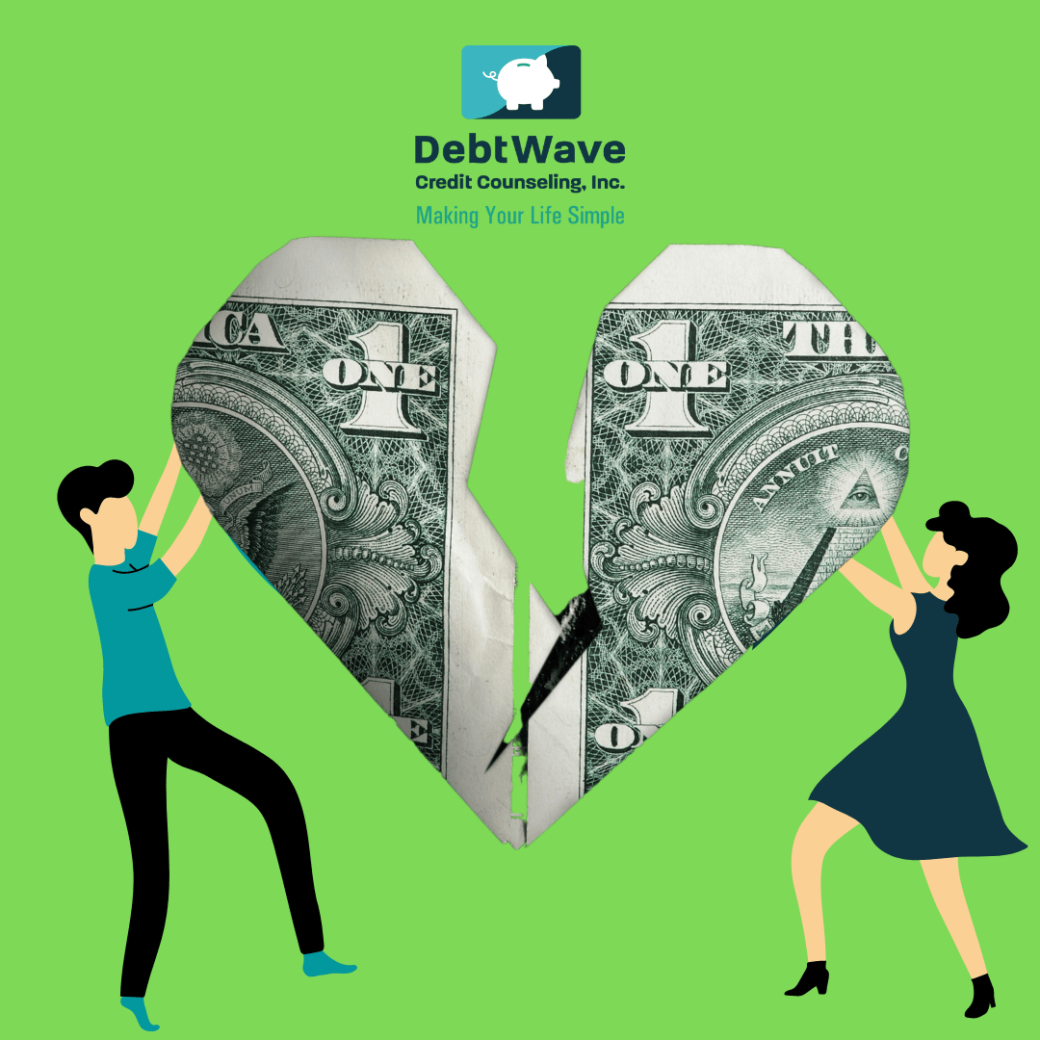 While the divorce process is known for being emotionally draining as you iron out millions of details like who gets the house, the car, custody of the kids, etc. There’s another custodianship that needs to be ironed out in the divorce process as well: your financial situation.

While Hollywood often portrays the financial side of divorce as a battle over who gets most, if not all, of the couple’s money, their assets in a divorce. That’s only half of the financial reality for most individuals. In fact, many couples are not just battling over their assets, but they’re playing a game of hot potato when it comes to liabilities and debts, including credit card debt.

So, who gets left with the credit card debt?

Well, there’s not an easy answer. It depends on several factors including:

‘Til Divorce Do Us (Financially) Apart

Generally, the courts are the ones who will divide the couple’s debts and assets in a divorce or separation process, including also determining who is responsible for paying specific bills. And how the courts handle your assets depends on your address.

In nine states—Arizona, California, Idaho, Louisiana, Nevada, New Mexico, Texas, Washington, and Wisconsin—assets, and liabilities are divided according to community law. Under community law, any debt accrued during a marriage is jointly liable by both individuals.

This means that in these nine states, everything that is acquired during the marriage is usually considered equally owned by the spouses; It is the “property” of their once-happy “community,” including:

This means that in these nine states, even if a spouse racked up a $5,000 credit card bill in their own name, without joint authorization, the other spouse is equally liable for the debt. However, debts in your name incurred prior to marriage or after separation or divorce are not considered community debts.

For example, if your spouse secretly spent $39,000 and put it on their Visa card during your marriage, you are likely liable for half the bill. Even if your name wasn’t on the credit card account and you had no idea this charge even existed.

The law works a bit differently in the other 41 “common law” states. In these states, you are responsible for the debt only if it’s in your name. This includes:

Note that you are still liable for the debt if you are a cosigner or if it’s a joint account and you were not aware of the charge in these common law states. That’s why it’s so important to really trust someone before cosigning or opening a joint account with them.

For example, in a common-law state, if your ex charged $39,000 on a joint Visa card during your marriage, then you are equally liable for the debt. Also, if you co-sign on your spouse’s credit card, you are liable for whatever debt they accumulate on that account. If you were not on the account, you would not be financially liable.

Some states consider the assets and debts each spouse brought into the marriage as well when determining who pays what debt. But most states consider marital debt to be any debt accumulated during the partnership, regardless of whose name appears on the account. So, keep in mind that the responsibility for joint accounts can vary. If there was a prenuptial agreement or postnuptial agreement, those legal agreements can influence any legal decisions as well.

But in most cases, both parties will be partially responsible for the debt, regardless of who was making the payment or accrued the debt, to begin with. For example, if there is only one authorized user on the account, that party likely will be given full responsibility for the debt repayment. However, sometimes there are exceptions to the rules.

Some judges will rule that debt incurred to support an affair, gambling habits, or lavish spending is not split equally. In those cases, the debt is considered wasteful and will be the sole responsibility of the individual who made the purchases.

But keep in mind that ultimately the judge has the right to assign a credit card debt to you, even if you aren’t technically liable for it.

In some instances, if the debt was incurred for necessary household items or expenses, you may be ordered to pay a portion of your former spouse’s credit card debt. The same rule goes for your spouse—they could be held responsible for a debt that’s solely in your name if the judge assigns the debt to them in a divorce decree, which is a legally binding decision.

The circumstances of every divorce are different, of course. Other factors that the judge is likely to consider include:

A judge may distribute responsibility for the debts in a way that is different from your contractual obligations to pay, but the most important thing to keep in mind is that the judge’s order does not change your contracts with your creditors.

In a 2015 survey, SunTrust Bank found that finances are the leading cause of stress in marriages. Specifically, the study found 35 percent of respondents reported money as a major source of friction in their relationship. In other words, for better or for worse, money affects every marriage.

It’s not always a lack of money that causes friction in a marriage – sometimes it’s a financial incompatibility that leads to divorce. Sometimes one is a saver the other is a spender, and the tension over money is just too much to handle.

Regardless of your reasons for separating, after a divorce, you will feel the financial loss of your partner, women more so than men. Women typically experience a 41 percent drop in their income, while men experience a 23 percent income drop, according to a 2012 study from the U.S. Government Accounting Office.

In other words, divorce hurts not only emotionally but financially.

It’s not just that you may be adjusting to a one-income household but there are other financial-related adjustments as well because “money really touches everything,” says Emmet Burns, brand marketing director of SunTrust Bank.

A divorce decree won’t change the contract on the debt, which means the original account holder will retain their responsibility as far as the creditor is concerned. If your spouse refuses to pay the assigned debt, the credit card issuer may come after you and they are legally in their right to do so.

“You can’t show your creditor the divorce decree and say you’re no longer liable for the debt,” adds John Ulzheimer, president of The Ulzheimer Group and a national expert on credit who formerly worked with Equifax and FICO.

Credit cards aren’t the only forms of debt you worry about in a divorce. You could also be responsible for other debts, including car loans, student loans, personal loans, mortgages, and business debts.

And it’s possible you may experience financial stress if your ex-spouse doesn’t pay the debt as ordered by a judge.

In these cases, your only recourse is to sue your ex, but many attorneys note that this can be a difficult and expensive journey full of headaches. And that’s because when you have credit card debt in both of your names, you are equally liable for the outstanding balance, even following the divorce, according to Experian.

Even with a divorce decree, it’s not going to be easy to remove yourself or your ex-spouse from joint accounts. For example, if you have a joint credit card, you can’t just remove yourself from the account. You’ll need to pay off the balance before you can close the account.

This means that even if your divorce decree assigns your former spouse responsibility for certain accounts in your name (or in the name of both partners), any missed payments or default on an account with your name on it will still be reflected on your credit reports.

Account payment history is an important factor in your credit scores, and late payments on accounts due to divorce can drag your scores down.

That’s why it’s important to make sure you fully understand your debt obligations throughout the divorce process. If your former spouse is responsible for paying an account with your name on it, communicate with them to make sure the account is being managed responsibly.

Get the Debt Paid Off

If possible, work with your ex-spouse to pay off any existing debts and close existing joint accounts. You can ask your creditors about converting an account to an individual account to protect your credit during the divorce too. Some creditors may allow you to transfer the balance of a joint credit card account to one solely in your name or your ex-spouse’s name.

If it’s not possible to transfer the debt to a new account and your ex-spouse is not cooperating with the divorce decree, try to at least make timely payments for the minimum amount due to avoid damage to your credit score.

You may want to consider paying off your credit card debt with the help of a nonprofit debt management program to reduce your interest rates on your credit card balances and pay off that debt usually in a fraction of the time it would have normally taken you to pay off the debt on your own.

Also check with your creditors to confirm that your spouse is no longer listed as an authorized user on your accounts—if so, have them removed immediately to prevent unauthorized future charges.

“Ultimately, divorce forces people to become much more aware of their finances, budgets, and money choices,’’ said attorney Regina A. DeMeo, an alumna of George Washington University Law School who works with custody and divorce issues through mediation, litigation, or advocacy. “It’s a tough lesson to live through, but it does provide you with great life skills.’’