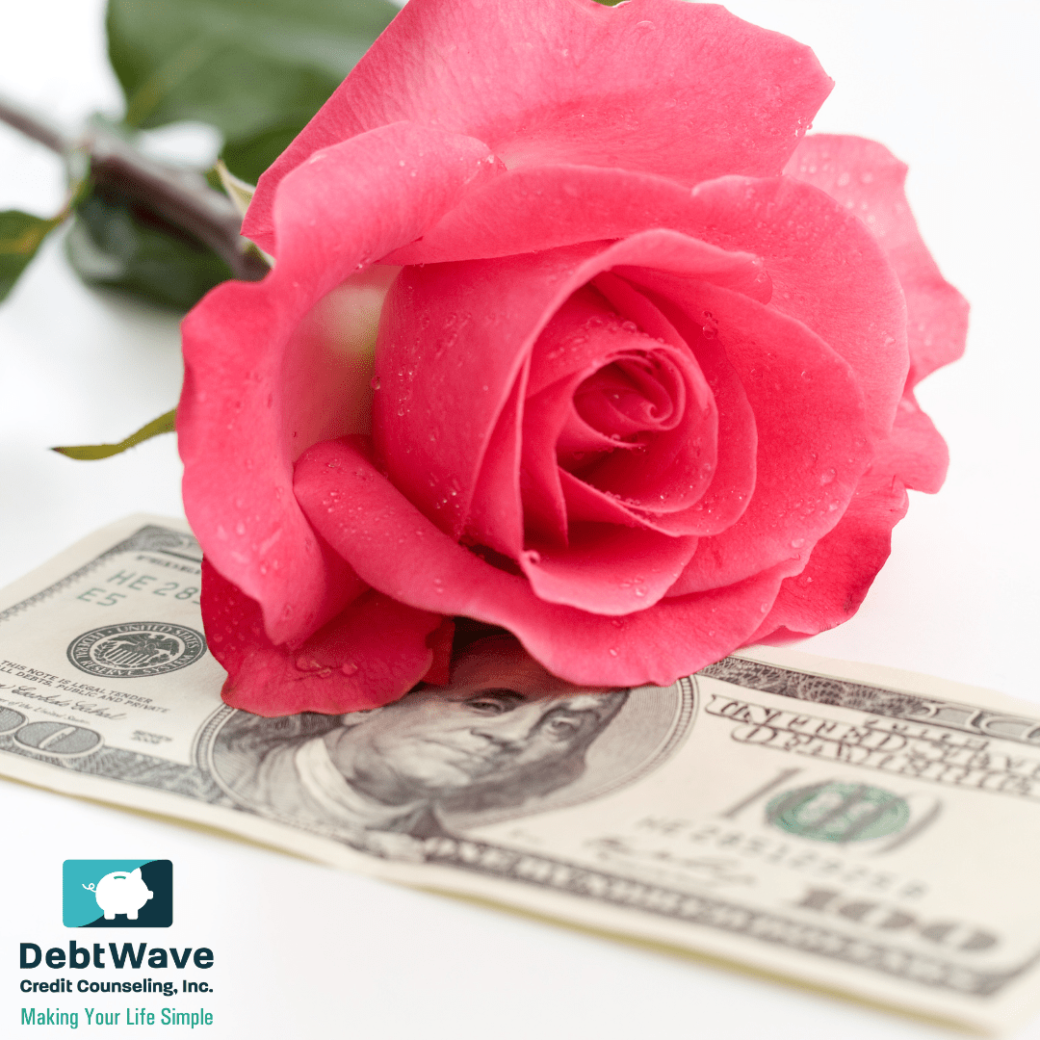 Can you improve your financial situation simply by believing that you can?

It’s a question I recently heard posed on a money podcast that piqued my interest since my own debt payoff journey similarly inspired me to heal money wounds that I didn’t even know existed before my debt-free journey.

Yes, our relationship with money comes with both roses and thorns. The rose part of our relationship with money is when things are going well. Roses can look like a regular paycheck, owning a home, fresh food in your refrigerator, health insurance, and the freedom to buy whatever you want whenever you want because you trust and know that there is more money where that came from.

Other roses look like having fully-funded emergency savings accounts, a well-funded retirement account, being able to gift other people and organizations money, going on vacations, and experiencing other once-in-a-lifetime moments.

The thorns, however, are those money moments we experience when things seem to be going all wrong, like maxing out a credit card with no idea of how you’ll pay off the debt, housing insecurity, food insecurity, not being able to afford childcare, and spending most of your time dodging debt collectors.

Each rose and thorn we experience surrounding money adds to the money scripts or the money mindset we currently have.

Does your money mindset affect your ability to pay off debt?

Money scripts are unconscious core beliefs about money, according to financial psychologist Brad Klontz. Negative money scripts can horribly affect your financial situation because they affect how you feel, which then shapes your actions and, eventually, the results you get, which essentially reinforces your OG negative money beliefs.

For example, if you are currently operating from a scarcity mindset, you may perceive a money-rose moment like getting a holiday bonus as a fluke. In some cases, you may spend the money quickly because it doesn’t match the narrative that you don’t have money, or perhaps you believe rich people are unlikeable and money is the root of all evil. In other instances, you may even attract some emergency expense that essentially cancels out your holiday bonus – a phenomenon that many lottery winners know all too well.

Perhaps you find the large holiday bonus to be cheap? Greed is an emotion we feel when we’re operating from a scarcity mindset. We don’t believe there is more where that came from and what someone else receives takes away from what we could have been given.

On the other end of the spectrum, those with an abundance mindset would likely view a modest holiday bonus as a win because they largely operate from a grateful mindset of I love money, and money loves me. There’s almost a certain level of amazement with what money can allow you to experience, not just buy, which is why those with an abundance mindset tend to appreciate every dollar they have.

So I was curious, especially with the recent interest rate increases and talk of a recession: Does your money mindset affect your ability to pay off debt?

As it turns out, some researchers have begun to study this question: What happens when those with a scarcity mindset, as well as those with an abundance mindset, experience financial hardships? Does one fare better than the other?

Although only a handful of anecdotal research has been collected so far, the results seem to indicate that those with an abundance mindset tend to have grown up in wealthier, high-income households and neighborhoods. When those with wealthier backgrounds experienced financial hardships, they often felt so uncomfortable, so out of their element that a majority found creative ways to earn money, pay off debts, and return to a standard of living that felt normal for them.

Based on this information, you may wonder: Are you doomed to struggle with finances if you grew up in an environment that inspired a scarcity money mindset?

Luckily the answer is no. Regardless of the money story that you adopted as a child, every person has the opportunity to change his or her money mindset – for better or worse.

How can you change your money mindset?

Dyana King, the owner of the money-coaching business Money Boss Mama, knows all too well what it’s like to have a scarcity mindset impede your ability to pay off debt.

Raised by a single mom, King says it was common to hear her mom say they didn’t have enough money or couldn’t afford things, which is where she says her scarcity mindset developed.

“My mother did not know how to take care of herself, let alone three kids. I saw my mom struggle,” says King. “We were always hearing about her having to write hot checks and being told we don’t have enough money.”

When King was a 21-year-old single mom and working college student earning less than $10 an hour, she says she had an experience that made her realize she was repeating her mother’s same scarcity money mindset with her own children.

“I was sitting on the floor when my daughter was supposed to be in bed, and I had no idea how I was going to pay my bills. She came up to me, and I lashed out at her because of the stress. I realized I was becoming my mother, and I did not want to be that person,” says King. “That was the moment where I realized that to give my daughter a better life, I had to become better myself.”

So, how did she shift from a scarcity to an abundance mindset and begin saving money?

In short, she taught herself how to have an abundance mindset regarding money.

It’s your responsibility, King says, to unlearn any negative thinking in order to reach your financial goals, and the first step to take is to get to know yourself better.

How can you do this?

Step One. Reflect on Your Relationship with Money

First things first, King suggests taking time to reflect on your relationship with money now and when you were a child.

King suggests writing down your relationship with money, including your fears. “If you write it down in a journal, you’re able to pick up on patterns and habits you have and the thoughts that create those. It allows you to embrace your history and move forward at the same time,” she says.

Also, ask yourself what your upbringing was like and lean into any uncomfortable memories, so you can start taking control of your relationship with money.

“We carry other peoples’ beliefs and habits that we’ve adopted as our own. But once you take that trip down memory lane, you start to shift those unconscious things into the conscious. That gives us the ability to take back the reins,” she says.

“This is such a gentle topic, especially for women of color and single moms, because a lot of how we view our money and what we say about our money comes from our upbringings and experiences,” King says. “Whether you’re aware of it or not, it plays such a huge role in your relationship with money right now.”

Be intentional with your money, says King. If you don’t set a specific goal with a specific amount, you’ll never feel like you have enough.

“Figure out what it is that you’re trying to accomplish and have a clear specific goal that’s attainable and measurable for your current financial situation,” she says. “When you have something that you’re focused on, you’re able to create a specific plan in order to reach that destination.”

Step Three: Remember Your Net Worth Does Not Define Self Worth

Being intentional about how you build your net worth requires you to consider your self-worth and how you view yourself. “I was someone where my self-worth was wrapped into my net worth, so that meant if my finances didn’t look good, I felt like I was a failure and wasn’t doing enough,” she says.

Your net worth is only a fraction of your identity, King says, and should be separate from who you are at your core.

“There’s a delicate balance between self-worth and net worth that has to be put in place when you’re walking your journey,” she says. “Otherwise, that puts you in a very vulnerable state.”

King is not alone in discovering financial freedom at the other end of changing her money mindset.

Alaya Linton of Hope and Cents believed it was impossible to pay off her debt. For years she assumed she was destined to continue making debt payments for the rest of her life, she says.

“But then I started to question whether that had to be the case, and began to believe it was possible to get rid of the debt. It was that shift in my mindset from ‘I can’t’ to ‘I can’ that allowed me to take practical steps to pay off the debt.”

From there, Linton started to think long and hard about how to get out of debt. Even if she wanted to make it happen, she needed a plan. Somewhere along the way, Linton says, one of her card issuers cancelled her credit card.

“With no other way to spend more money than I had coming in, I was forced to live within my means,” she says. “I started using a budget, slashed expenses, brought in more income, and went from overspending $2,000 every month to paying off the $74,000 in just over two years.”

Monica Louie and her husband paid off $120,000 in debt in two years on a single, middle-class income. They were 32 years old when they started, she says, and were trying to stay in control of their finances. She had just become a stay-at-home mom and was pregnant with her second child. Everything was perfect in life – except for their mounting debts.

“That’s when I came across success stories of others who had paid off all their debt, including their mortgage,” says Louie. “Some were young families in a similar situation, so we knew that if they could do it, then so could we.”

But, how did they do it? “We never stopped to think if it was a realistic goal for our situation or not,” she says. “We just focused on making big progress quickly to keep up our momentum and what being debt-free would mean for our family.”

Debt blogger Zina Kumok of Debt Free After Three felt overwhelmed by her $28,000 in student loans at first, but she changed her mindset when she found out that even small overpayments toward her debts could make a big difference.

“One day, after going through my budget, I decided I could allocate an extra $10 a month toward my loans,” she says. From there, Kumok called her loan provider to see how big of a difference that would make.

“She told me an extra $10 a month would remove one year from the total repayment term,” says Kumok, meaning she would pay off her student loans in nine years instead of 10.

From then on, Kumok started being really careful about how she spent her dollars. She tracked her spending carefully and always bought used items, found coupons, and looked for new ways to save.

“Once I knew that every dollar was valuable, it really changed my thinking,” she says. “Eating out became a luxury and spending money at the bars was a rare occurrence.”

With her new attitude, Kumok paid off her debt in three years.